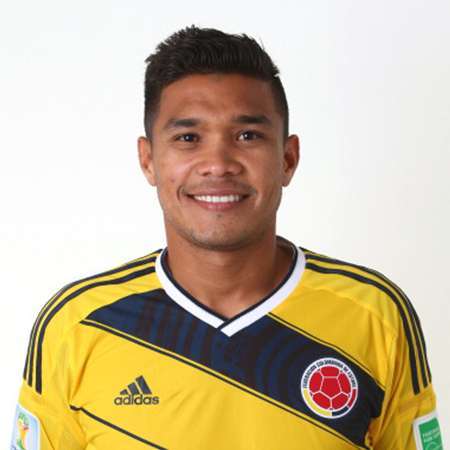 Teofilo Gutierrez is a Columbian Professional Football Player, born at Barranquilla, Columbia in the year 1985 May 17. His full name is Teofilo Antonio Gutierrez Roncancio. Teofilo Gutierrez and Cristina Gutierrez are the names of his parents. Teofilo cherishes the height of 178 cm and body weight 83 kg. He is a married man. Yeimi Collantes is the name of his spouse. This couple is the proud parents of three children named Yeilou Gutierrez, Cristiano Manuel Gutierrez, and Shaddai Gutierrez.

Teofilo Gutierrez had completed his education at his native school and started practicing football in the local ground with the amateurs. He started his professional career from 2006 joining at Barranquilla, which is the second division team of Atletico Junior. After a season in this team, Teofilo promoted to the senior team in 2007 from where he played in 93 matches making distinguished 47 goals. He remained in the team till 2009.

In 2010, he signed the contract with the Turkish Club Trabzonspor. Teofilo moved to his country without informing his manager or the club. He said he had some health issues which seemed to be like vague as the doctors did not find any issues. In 2011, an Argentine club bid to Trabzonspor for Teofilo, thus making him play from this Argentine Club named Racing Club. In the year 2012, this club loaned him to Lanus and Atletico Junior from where he played in 2 matches bagging a goal and 18 matches scoring 5 goals respectively. The tenure of Teofilo ended with Racing Club in 2012. In the seasons 2012-2013, Teofilo played for Cruz Azul in 28 matches bagging 9 goals. Then after in 2013, he joined the team of River Plate.

Teofilo Gutierrez is playing in the Current Team of Argentine Club Atletico River Plate since 2013 from squad No.29 as a Forward. Besides, he is playing for the Colombia National Football Team since 2009. He has played in 27 matches from this team making 11 prominent goals in the name of his nation Colombia. There is no any disclosed information about his Salary record but this player holds the market value of worth 1.800.000 Euros. As of 2018, his net worth is estimated to be around $3 million. His current market value is £1.44m. His highest market value was £3.15m in 2015. CT Creative Talent GMBH is the name of the agent of Teofilo Gutierrez. This talented player has earned the title of Most Valuable Player in Turkish Super Cup 2010, Top Scorer in Torneo Clausura 2011 Argentina and Golden Boot of Copa Mustang I 2009 for scoring 16 goals.

Teofilo Gutierrez is a cult figure in Colombian social media. He is a talented striker. He has an attacking scheme in the game. This player is excellent in creativity so goes for shots after shots to give one. He has got excellent killer instinct with the quality shooting and heading skills. He is good at speed, dribbling the ball, his discipline in the game and performance rate. This will be the first experience of Teofilo to play for the nation in 2014 FIFA World Cup and hope resides when there is such a killer goal shooter in the team.