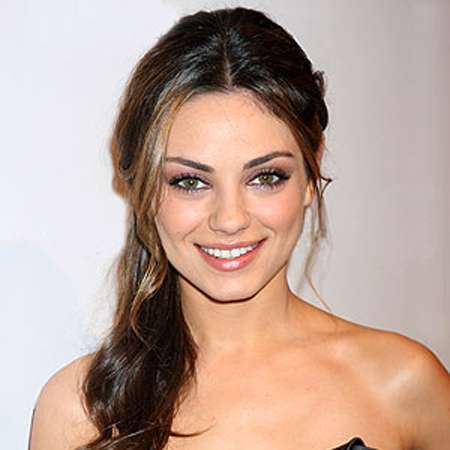 Mila Kunis is a globally known American film and voice actress best known for her role in the popular TV sitcom  That '70s Show as Jackie Burkhart. She is also the voice of Family Guy's Meg Griffin. Her other notable works are Forgetting Sarah Marshall, Friends with Benefits, Black Swan among many others.

Milena Markovna Kunis/Mila Kunis was born on 14th August 1983 in Chernivtsi, Chernivtsi Oblast, Ukraine. Her family, mother Elvira who was a physics teacher, father Mark Kunis who has worked as a cab driver and a mechanical engineer along with her brother Michael Kunis moved to LA from Ukraine when she was only seven years old.

Kunis went to Rosewood Elementary School. When she was nine years old, her family enrolled her in an acting school in Los Angeles Center for Enrich. But after getting in a few cla s ses in LACES, Kunis moved to Fairfax High School and completed her graduation in 2001.

Mila Kunis went to UCLA and then Loyola for higher studies. She wrote an essay that started as ''Imagine being blind and deaf at age seven.' And that's kind of what it felt like moving to the States'', that helped her get into college.

Mila Kunis is an American by nationality and is married to an American as well. However, she is of Russian descent, making her a Russian-American as per ethnicity.

Mila Kunis's acting career began at the young age of 9 when she was discovered by a casting agent. She started by acting in commercials. At her age of 10, Kunis auditioned for the role of a Russian Jewish Girl but she failed, and later she was cast in a secondary role of a Mexican girl.

Kunis became well-known after playing Jackie Burkhart on the Fox sitcom. 'That '70s Show' which ran for eight seasons, won her two consecutive Young Star Awards in the category of Best Young Actress in a Comedy TV Series.

Because of her performance in That '70s Show, Kunis replaced Lacey Chabert to voice Meg Griffin from the animated Fox sitcom Family Guy.

For a few years more, she appeared in various commercials and shows, as her professional film career began only in the year 2001 when she appeared on 'Get Over It' opposite Kristen Dunst. Mila Kunis didn't have breakthrough success in movies till 2008. Forgetting Sarah Marshall that came out in 2008 set her to a good box office record path.

Kunis became popular overnight after the release of Comedy movie Extract in 2009 where she played alongside Ben Affleck and Jason.  She followed that up by appearing in the 2010 movie The Book of Eli alongside Denzel Washington. Another 2010 film, Black Swan, where she was cast alongside Natalie Portman, also became a huge success, garnering her a Golden Globe nomination.

In 2012, Kunis appeared in the movie Ted which is considered as her most successful film till date. Mila Kunis' recent notable movie Bad Moms, released in 2016, which also stars Kristen Bell and Christina Applegate, received mixed reviews from the critics but did well at the box office.

Mila Kunis has signed to star in the comedy movie The Spy Who Dumped Me alongside Kate Mckinnon; the film is set to release on July 6, 2018.

Later, in April 2012, Kunis began dating her former That '70s Show co-star Aston Kutcher. After being in a relationship for two years, the couple got engaged in February 2014.  Kunis gave birth to Wyatt Isabell the same year in October.

In 2015, July first weekend, Aston Kutcher and Mila Kunis got married in California. She gave birth to Dimitri Portwood Lutcher in 2016 November. Her husband thought as she was his sister when filming That 70's show.

In 2001, she revealed that she had been struggling with chronic iritis that caused her temporary blindness in one eye. She also has heterochromia iridium a disorder in which the irises are different colors as her left eye is brown and another is green.

Mila Kunis' Salary And Net Worth

Mila Kunis is known as a popular American actress who has worked in several television series and films. Her roles in the movies earned her several awards and acclaim. She also acc u mulated a whopping amount of money from her career. As of February 2019, Kunis' net worth is estimated to be around $65 million.

Her long and successful career that is still ongoing and her successful marriage help her maintain such an enormous net worth. Forbes listed her in the top 10 highest paid actress in 2017 and she is listed in the sixth position in top 10.