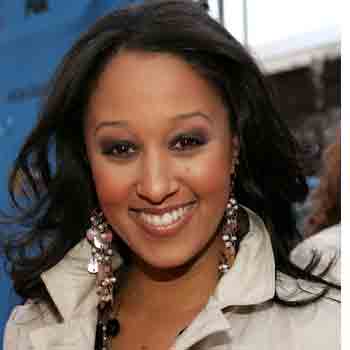 Tamera Darvette Mowry-Housley is an American actress and model best known for her portrayal as  Tamera Campbell on the ABC/WB sitcom Sister, Sister (opposite her identical twin sister Tia Mowry).

She has been married to Adam Housley since 2011. The couple shares two children; a son, Aden John Tanner Housley, and daughter Ariah Talea Housley. Their wedding ceremony was held on May 15, 2011, in California's Napa Valley.

Tamera Mowry was born on July 6, 1978, in Gelnhausen, West Germany. She is the older twin by two minutes. Tamera was born at 4:30 pm, followed by Tia at 4:32 pm. She also has two younger brothers named Tahj Mowry, an actor, and Tavior Mowry, who played college football for University of California, Davis.

She is the daughter of Darlene Renee Mowry and Timothy John Mowry. Her mother served in the U.S. Army and later became her children's manager and her father was in the U.S. Army at the time of her birth and who became a custody officer/jailer with the City of Glendale Police Department when the family moved to California.

Tamera has played many successful movies. In 2000 she played Something to Sing About and Seventeen Again, In 2002 she played The Hot Chicks. She was praised by many people in her every movie.

Mowry is a German-born American actress who first gained fame for her teen role as Tamera Campbell on the ABC/WB series Sister as a sister opposite to her identical twin sister Tia Mowry.

She also played Hope Daniels on short-lived series Roommates which only lasted for one season during the spring of 2009 in ABC TV. She also starred in Twitches, a Disney Channel Original Movie, and its sequel as well.

She is also known for her role in dramatic television as Dr.Kayla Thornton on the medical drama Strong Medicine. From the beginning of August 2011, Tia & Tamera began airing by Style Network. Mowry is also one of the hosts of The Real talk show along with Adrienne Bailon, Tamar Braxton, Loni Love and Jeannie Mai premiered on July 2013.

Tamera Mowry's net worth is $4 million at present. She has earned a good amount of salary from her acting career.

She has won many awards and has been nominated as well for many award functions. She has won NAACP Image Awards for twice out of being nominated for five times. In 1999 she won Image Award for Outstanding Actress in a Comedy Series as a sister in the series Sister.

In 2000, she won the same title for Sister. She has also been awarded Nickelodeon Kids’ Choice Awards for four times In 1995, 1996 and 1997 all as Favorite Television Actress for the series Sister, In 1998 she was awarded Hall of Fame Award.

She is married to her husband Adam Housley, a  Fox News Correspondent.  Adam was her boyfriend for almost six years and their wedding was on May 15, 2011, in California’s Napa Valley. The engagement ring also gained popularity along with her wedding as the ring was a vintage design by  Viraggio which her husband presented her on that very day of the wedding.

The couple has one child, a son, Aden who was born on November 12, 2012. They are three members in her family for now but there are rumors saying that Tamera and her sister Tia want to get pregnant at the same time.

She is 1.65m taller in height and has body measurement 34-24-34. She takes care of her body but more than her body she takes care of her hair. Her hair color is half black and half white. Tamera and her sister Tia both got matching wrist tattoo saying “Jumelles”, which means Twin in French. Mowry is a religious person.