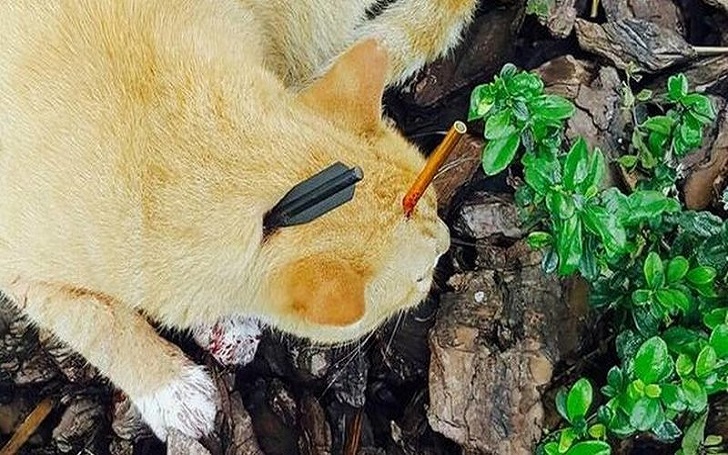 The death of the cat, nicknamed Strushie, after being shot in its head with an arrow behind the South Beach hotel in Florida has horrified all the animal activists and pet lovers.

After being shot, the cat was taken to a local veterinarian, but his injuries were so severe that he had to be euthanized.

But when Miami detectives came to the death scene, they suspiciously found that the footage from that day was completely erased. The department enlisted the assistance of the U.S. Secret Service’s Electronic Crimes Task Force, which specializes in recovering erased data.

After the full investigation and of what they turned up led to the arrest on early Wednesday of the hotel clerk Georgios Lollies, 36, with the charge of Animal Cruelty and Tampering with Evidence.

Police said the footage showed Lollias walking around with a crossbow and aiming it into some bushes where Strushie was hiding.

The accused killer admitted that he shot the beloved cat twice using a crossbow in April, according to an arrest report.

Kollias was assumed to be living in the United States illegally without any criminal record in Florida. He is suspected of killing the cat because the hotel management believed the strays were a nuisance.

"It is a great relief that we have found some level of justice for Strushie," said the Miami Beach Police Chief Daniel Oates. "This was a horrific act of animal cruelty. I congratulate our detectives on this arrest and the U.S. Secret Service for the critical assistance they provided to us."

Lollias is being held in lieu of a $30,000 bond. He also has an immigration hold, according to the Miami-Dade Department of Corrections website.