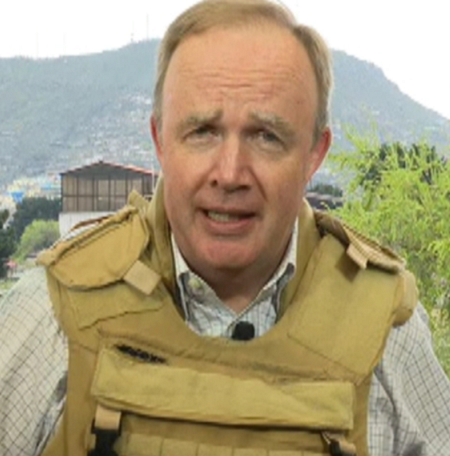 When Is Steve’s Birthday?

Steve leads a low-key profile; thus, he even has not disclosed his birth details. However, according to Brian Stelter, Steve’s birthday is on 11th September. He was born somewhere in the United States of America and belongs to American nationality.

This is Steve Harrigan's birthday pic.twitter.com/WmsRioBpA3

Steve, who is fluent in the Russian language, studied at Duke University and holds a Ph.D. in comparative literature. Besides this, he did not disclose anything about his parents, siblings, and childhood.

Steve is a famous television news correspondent, who had worked as a CNN correspondent for around ten years before joining Fox News Channel. During his tenure at CNN, he had reported the inside of the Kremlin when the Soviet President Mikhail Gorbachev resigned in 1991 and Chechen War.

He joined Fox News Channel in 2001 as a Moscow-based correspondent.

In 2008, Steve reported from Georgia, while it was combating with Russia. During the dangerous time, he even had to run after being targeted by gunfire. In 2010, he reported for a major earthquake in Haiti and also reported on Hurricane Harvey.

In 2014, he reported Malaysia Airlines Flight 17 crash from Donetsk, Ukraine. On 13th November 2015, he covered the deadly terrorist attack in Paris.

Overall, Steve has reported varieties of national and international stories like Mexican drug cartel violence, the Cuban economy, Venezuelan president Hugo Chavez’s death, protests in Brazil, and so on.

Steve was once dragged into controversy back on 21st March 2011, when CNN foreign correspondent Nic Robertson criticized his coverage of Operation Odyssey Dawn and allegations Libyan government used foreign journalists as human shields against coalition air-strike on Mummar Gaddafi’s compound in Tripoli.

Steve faced backlash when he refused to participate in the trip organized by the Libyan government to inspect the attack site.

As per Nic Robertson, the Fox News team sent non-editorial members instead of Steve.

Steve Harrigan's Net Worth in 2020

Being active in the journalism sector for over decades, Steve is earning a hefty figure of money.

Steve is a millionaire. As of 2020, his net worth is around $4 million, whereas he earns $350 thousand per annum. The news correspondent for Fox News earns an annual salary of $75 thousand; he might be earning in the same range.

While working as a CNN correspondent, he might have received a salary of $51 thousand per annum.

Steve is exceptionally secretive and has kept his lips sealed when it comes to his private life. The news correspondent has not mentioned if he is a married man or dating someone or is still single.

Steve is not that active in any form of social media accounts; thus, it is quite hard to trace out the information of his personal life.

Some sources report that the television news correspondent might be a married man and leads a healthy married life with his wife.