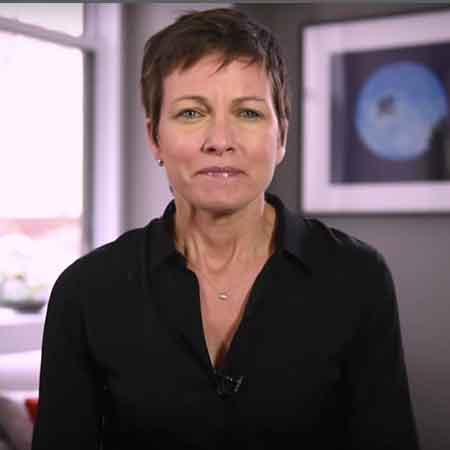 American journalist and correspondent, Stephanie Gosk, popularly known for her association with NBC News.  She contributes to all platforms of NBC News, including Today, NBC Nightly News, and MSNBC. Talking about her personal life, she is openly lesbian and dating her longtime girlfriend, Jenna Wolfe. The couple is proud parents of two children.

Stephanie Gosk was born on April 17, 1972, in Londonderry, New Hampshire under the birth sign of Aries. She completed her bachelor degree in economics from the Georgetown University B.A.

Gosk belongs to American nationality and her ethnicity is White.

She joined Vermont Middlebury College and later on enrolled Georgetown from where she received an economic degree. As per her, she moved to Georgetown from Middlebury so that to get a different experience. Just after the completion of graduation, she worked in the Dominican Republic.

Stephanie Gosk started her journalism career as a desk assistant and off-air producer for ABC News in New York City. She produced major breaking news of the 2000 presidential election. Then she served as an ABC News correspondent in London and as a producer in Boston.

While at ABC, Gosk traveled alone to Iraq and covered the news for “Good Morning America” and “World News Tonight” while embedded with the United States military. She reported the various news including the death of Pope John Paul and Hurricane Katrina.

In 2006, Gosk joined NBC News as a correspondent for the Investigations Unit. She contributes on all NBC News and MSNBC programs including “TODAY,” “NBC Nightly News with Lester Holt” and NBCNews.com.

During her tenure with NBC News, Gosk has reported on a protest in Chicago, the Orlando nightclub shooting, the Flint water crisis, the trial of former House Speaker Dennis Hastert and others.

Stephanie Gosk was based on NBC News’ London bureau until September 2012  where she covered the death of Osama Bin Laden from Pakistan. In 2014, she reported about the LGBT issue in Russia during the Sochi Winter Olympics.

Stephanie Gosk's, Earnings, Net Worth And Major Source Of Income

Stephanie Gosk is a popular NBC journalist and correspondent, she has earned a good sum of fortune form her journalism career. She earns  $96,726 to $121503 as an NBC correspondent. If we believe some online sources, the media personality has an estimated net worth of $2 million.

And Gosk's partner Wolfe has a net worth of around $2 million as per celebrity net worth in 2019.

Stephanie Gosk is openly lesbian, she is in a romantic relationship with her partner, former Weekend Today news anchor Jenna Wolfe. The couple has been dating since 2012.

Getting ready to go on a work trip to #Utah but not before reading one last book to m'girls. pic.twitter.com/LltMFx21KE

As of 2019, she lives in New York City with partner Wolfe and their daughters.