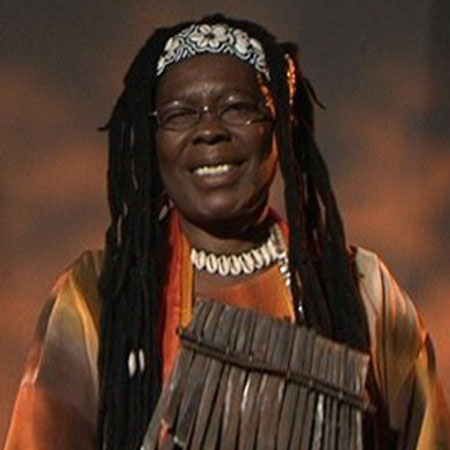 Stella Chiweshe, 70, is a Zimbabwean musician. This renowned musician Stella is popular for her singing and playing of the mbira DZ VAD imu all over the world. She is also a first successful female artist to venture into the male-dominated music industry.

Stella Chiweshe was born on July 8, 1964, in Mujumi Village, Mohondoro, Zimbabwe. She was raised in the Mujumi Village of Mhondoro. Regarding her ethnicity she is African, and her nationality is Zimbabwean.

Chiwesa learned to play mbira in her very young age from her mother’s uncle. She trained with her grandfather for three years starting from 1966 to 1969. At the time she was among few females who used to play the instrument. After that, she participated in the National Dance Company of Zimbabwe as mbira soloist, dancer, and actress.

Stella Chiweshe began her singing career and playing mbira, a traditional instrument of the Shona people of Zimbabwe, from her early age. She has also taken the traditional Shona music of Zimbabwe to the international stage.

In 1997, Stella Chiweshe got a chance to meet several renowned singers like Peruvian vocalist Susana Vaca and Tex-Mex-singer Tish Hinojosa with whom she has done several shows.

After having a great landmark in a musician, Stella Chiweshe visited several countries like Mozambique, Germany, Australia, Switzerland, Yugoslavia, India, Korea, and China to perform solo.

Stella Chiweshe’s solo work has helped her to become one of the most original artists on the contemporary African scene. Further to add, her solo was greatly liked and played at home and abroad, she has performed many times in Germany as well. She is a regular performer at the prestigious WOMAD world music festival.

Besides performing as a soloist, Stella Chiweshe often plays in combinations with guitars. Stella conducted an international women’s music festival in Zimbabwe. She also made an appearance in the Godwin Mawuru film I Am the Future, where she portrayed the character of a young woman who travels to the big city to escape Zimbabwe’s independence war in the developing areas.

The African musician Stella Chiweshe was a married at a very young age. Stella recalled days where her husband didn’t want her to play music. Although her husband tried to stop her from playing music, it never stopped her but it filled her up with a greater energy.

However, her husband left her and her hardship was doubled as she was a young mother. But she boldly expressed it was the best thing that could have happened to her. She was also a mother of three children but lost one of them.

Currently, Stella is spending happy life as a musician and singing career.

Information regarding Stella Chiweshe’s net worth is yet to be revealed. She stands at the height of 5 feet 8 inches and has a plus size figure but she looks fit even at the age of 70.