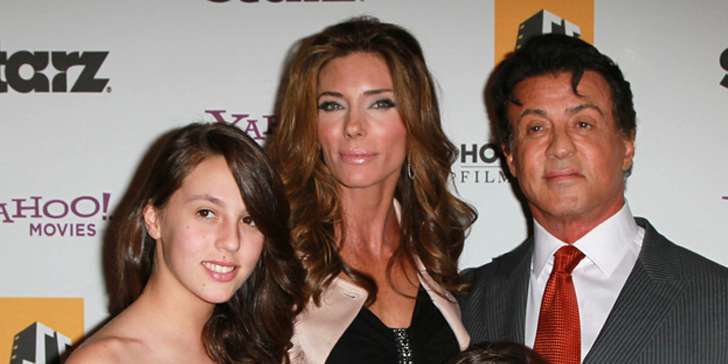 On the 27th of August 1996, a beautiful child was bestowed to the dazzling couple of Sylvester Stallone and Jennifer Flavin. This child grew up to become the gorgeous Sophia Rose Stallone. But the two definitely had to go through a lot before finally finding each other and finding such a mesmerizingly beautiful girl is again a whole different story.

Well, according to People, Sophia’s father Sylvester and mother Jennifer first ran into each other during a random event at a West Hollywood restaurant way back in 1988. By that time, Sylvester already had established himself robustly in the Hollywood. He was a man of charms with his lofty stature and Flavin, the then 19 year old model, was blooming iridescently. The bond was inevitable! But by the time Sophia’s parents were about to take their first step (their marriage) towards getting Sophia, Sylvester had been through a lot already. According to People, Stallone and his first wife, Sasha Czack, met the end of their relationship in 1984 after 10 whole years of being together. Again, Stallone married another Danish model named Brigitte Nielsen. The marriage, unfortunately, only lasted for 19 months.

So much for her parents; let us see what Sophia is up to right now. At 19, Sophia has started the freshman year at USC. Though no official announcements of her making a career as a model has been heard, it is well known that she has made some appearances in fashion shows as a model. Sophia has two sisters, Sistine, and Scarlet. Now, talking about her nature, her mother has stated that she takes after her father in many aspects. Jennifer says "She is the one that most resembles her father. Like him she has read nearly all of Shakespeare's books. They have a very special bond, they think alike and even have the same gestures, Sophia is the love of his life.” From this, it is utterly clear that Sophia loves her father and Sly too loves Sophia a lot. The death of Sophia’s brother Sage by a heart attack has hit Sylvester very hard making his daughters even more special for him.

Unfortunately, this beautiful young woman is not all happiness and fun; she has some serious health issues too. Back in November 1996 when she was just 2 and half months old, she went through an open heart surgery at UCLA Medical Center. Doctors said that they were successful and that everything went as planned. Years later, it came into light that the innocent little beauty had to go through the procedure yet again which happened in the December of 2012. It was revealed that the tissues that the doctors put in her heart when she was still an infant, had widened, thereby necessitating the operation. She is fine now.

Sophia is a strong girl and likes to keep her personal matters like her boyfriend, affairs and other such things to herself. So there is little for us to nibble at the moment. However, she is almost at the onset of her twenties now and we can expect something from her soon perhaps. But, we haven’t really heard any of it as of now.