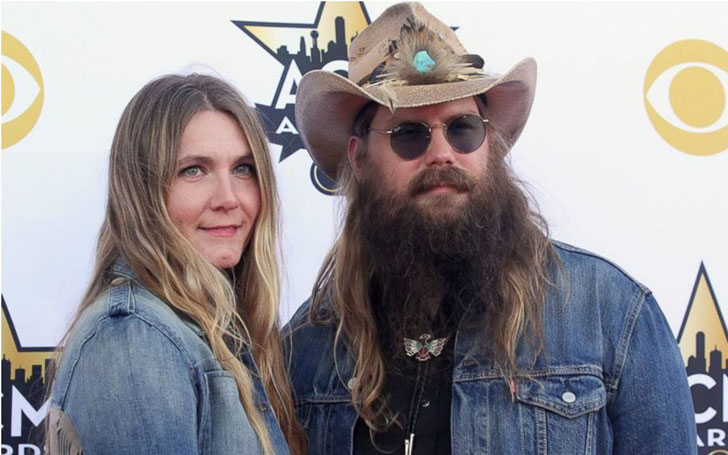 Songwriter Morgane Stapleton has flaunted her growing baby bump at the 2017 CMA Awards in Nashville, Tennesse where she stepped on the red carpet with husband Chris Stapleton.

Morgane's singer husband Chris Stapleton grabbed two major awards in male vocalist of the year and album of the year in the award while he lost the entertainer of the year (he won in 2016) to Garth Brooks.

Stapleton looked stunning in a long-sleeved airy dress with an elaborated floral pattern, accessorized with a gold clutch. Meanwhile, her husband Chris looked in blue shirt,  dark trousers, and a matching blazer, brown boots, and a cowboy hat.

According to People, the couple, who are already parents to a son and a daughter, is expecting twins. However, they didn't publicly reveal their names.

Morgane announced her third pregnancy on October 31 through an Instagram post which she posted on the occasion of the couple's 14-year marriage anniversary. Captioning the beautiful black and white picture she wrote:

Though Morgane's pregnancy announcement came in late October, some of their fans were already known to the fact as the country singer, 39, shared the news during his Dallas concert at Starplex Pavillion.