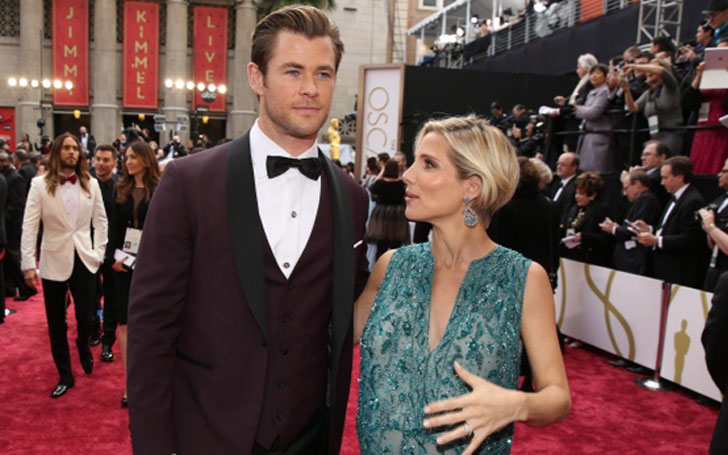 Chris Hemsworth, Thor, and his Spanish model girlfriend Elsa Pataky's got married in 2010. They did not take any time to get married as they met each other for the first time in the same year. Hemsworth currently filming Thor's sequel to Thor: Ragnarok along with Tessa Thompson, ?Taika Waititi, ?Anthony Hopkins and ?Stan Lee.

So, was it love at for sight? Well, that's what Thor said in an interview. Along with that interview, we cover five most adorable moments from Hemsworth married life with Elsa Pataky.

1. When Chris Hemsworth revealed why he and Elsa Pataky married so fast

In Hollywood, couples tend to marry late as it's speculated that early marriage adversely affects one's career. Kicking that stereotype directly on its face, Chris Hemsworth, and Elsa Pataky got married.

And here's Hemsworth explaining why they got married. It is the cutest reason ever!

Chris answers why they got married so quickly?

Oh!! and that's not all, here's Elsa Pataky explaining her side of the story. And, if there's anything that can be more adorable than Hemsworth confessing his love for Elsa Pataky it is this.

Elsa says, she never thought she would ever marry Chris as he was so popular already and had so many girls falling for him whereas she was in the starting phase of her career.

2. When Chris debunked divorce rumors by posting THIS

There was a time when internet flooded with the rumors of this duo getting separated as they were spotted in different places with different people.

Also, read: After Knowing What Chris Hemsworth Of 'Thor' Did For His Wife Elsa, You Will Fall In Love With Him

But Chris the real life superhero saved the day by clearing the rumors going to Instagram with a photo of these two in a cruise.

It was more than enough to sushh the media! But, thanks to the rumor we got to see the amazing pictures of the couple on a cruise with a slightly humorous caption that read

''Looking for a new wife according to @womansdayaus and other misleading outlets! Honey you still love me right?!''

Seems like Hemsworth succeeded to roast the media all the while confirming they were together!

3. When they went vacationing to Byron Bay in April this year and THIS happened

Fast and Furious actress and Thor were on a family vacation, a star-studded vacation to be exact, where Chris was ( playfully) not giving any attention to his wife and Elsa gained his attention by kicking him. Of course, it was captured in photos!

It was even cuter when they took some time off for themselves behind the trees to share warm hugs. Aww...

When your favorite celebrity couple is out for vacation and steals some time away from the crowd for cuddles, what else could be more adorable?

During the second day on the set of Horse Riders, Chris Hemsworth received something unexpected from Elsa Pataky. It was Elsa herself!

She missed her hubby so much!

And, Chris was so happy, he took to Instagram to share a picture of them laying in bed together and captioned it

Day 2 on the set of Horse Soldiers and found myself in bed with @elsapatakyconfidential. Usually work means she's gets a break from me, not today honey

5. When They Attended Golden Globe Awards together and Chris did THIS

The Hollywood couple were in attendance at the 2017 Golden Globe Awards and obviously, all eyes were on them. The couple appeared flawless together! And because Thor loves Instagram so much, he posted a photo of Elsa Pataky with a caption that read  "my hot date".

The couple has been married for seven years already, and it seems as if they are just discovering their love for each other. We pray this Hollywood couple stays always this cute!