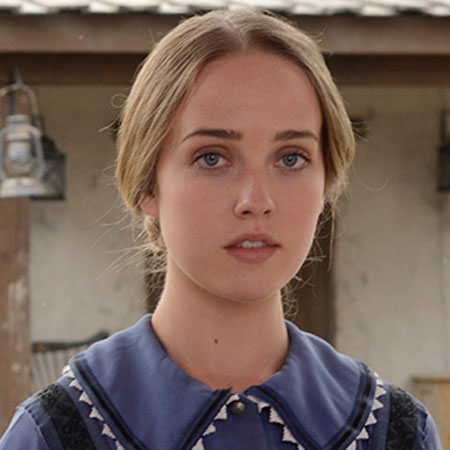 English-Canadian actress, Siobhan Williams is known for portraying Naomi Hatch in American Western television series, Hell on Wheels. She also made her appearances on ABC's Black Box (2014) and A&E's first scripted drama UnREAL. In 2014, Williams won Young Artist Award under the Best Performance in a TV Series as Guest Starring Young Actress 17-21. She is in a relationship with a Canadian musician, Steve Bays.

Siobhan Williams was born on May 6, 1991, in Cambridge, England. She is of Caucasian ethnicity and holds British nationality. Information about her parents and siblings are yet to be revealed.

At a young age, Williams moved to Canada and trained intensively for thirteen years at the School of Alberta Ballet in Ballet, Jazz, and Modern dance. She also learned voice, guitar, violin for 7 years. She is also accomplished on various theatrical and on-camera techniques.

In 2012, Williams debuted on the big screen with the American teen drama television film, Radio Rebel. She was cast alongside Debby Ryan, Merritt Patterson, Sarena Parmar, and Nancy Robertson, among others. The same year, she featured in two movies, Flicka: Country Pride, and Christmas Miracle.

Williams then made her appearances in various movies, such as Forever 16, Forsaken, and The Night Pond. Her TV credits include Hell on Wheels, Black Box, Reign, Wynonna Earp, and Sea Change among others.

Williams was last seen in the 2018 TV movie, Secret Millionaire as a lead character, Alisson Johnson. In the movie, she shares the screen with Steve Lund, Allie Bertram, and Adam DiMarco among others.

In the year 2019, the actress played the role of Brandy in the TV series Deadly Cla s s.

Siobhan Williams earns a decent amount of money from her career as an actress. and her net worth is $800,000 as of February 2019. As per some sources, an average salary of a television star ranges between $150k to $1 million. She has worked in many movies and TV series. It is also a major source of income.

She has won Young Artist Award in 2014, for Best Performance in a TV Series - Guest Starring Young Actress 17-21.

Siobhan Williams is in a romantic relationship with a Canadian musician, music engineer, producer as well as a writer, Steve Bays. He is also the founding member of Hot Hot Heat.

The couple is together since 2015, and often post pictures of each other on their Instagram accounts. Most of their social media post has described their successful relationship. On May 8, 2019, Siobhan has shared the picture of the couple sharing kissing in which she has caption it saying, "Happy birthday to my one and only, my other half."

They seem to be enjoying their love life and to this date, there is no rumor of couple separation. Also, there is no news of a couple of tying knots soon.

Siobhan Williams is an avid singer and songwriter. She loves playing the guitar, writing music, and taking photos. Since becoming involved in movies and TV, she has trained in several theatrical and on-camera methods.

She is an animal lover. She has a fur baby cat. Her Instagram is filled with her cat pictures.  She also travels to different parts of the world during her leisure time.