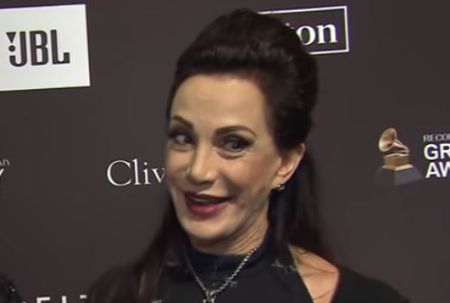 Sheryl Goddard, a ballerina instructor, and choreographer came to the limelight after she got married to Alice Cooper. Although, she is not popular as compared to her rockstar husband she is definitely one of the popular star wives so far.

Goddard has been married to Alice Cooper since 1976. The couple is blessed with three children; Calico Cooper, Dash Cooper, and Sonora Rose.

Goddard holds an American nationality and regarding her ethnicity, she is White American. Further information about her parents and siblings is yet to be revealed.

On the other hand, her life-partner Alice Cooper was born on February 4, 1948, in Detroit Michigan, the United States, to parents Ether Moroni Furnier and Ella Mae Furnier. Currently, he is 74 years old which is almost a decade older than his wife.

Goddard is trained as a ballerina and is also a very talented choreographer. Before marriage, she used to perform at several shows and events as a dancer and also used to teach dancing.

Goddard grabbed huge attention as a wife of renowned artist Alice Cooper. Copper is regarded as one of the recognized musicians in the music world. He also worked as an actor for many movies and TV shows.

Sheryl Goddard's Net Worth And Earnings

Sheryl Goddard is a very strong personality who has easily managed to be a successful mother and wife. Sheryl has never made her net worth public to the media. However, the estimated net worth of Alice Cooper is around $40 million dollars.

Who Is Sheryl Goddard's Husband?

Beautiful Sheryl Goddard married  Alice Cooper on March 20, 1976. At that time, Sheryl was a choreographer and ballerina instructor, who performed in the Alice Cooper show from 1975 to 1982. After the couple fell in love and dated for a year, they got married.

Sheryl Goddard and Alice have three beautiful children together. Calico Cooper is their elder daughter, who was born in 1981. She is an actress and singer who have been performing in the Alice Cooper show since 2000. Dash is their second child, born in 1985, who is currently, a student at Arizona State University. Sonora Rose is the youngest of three children,  born in 1993.

Some reliable sources reported that Rock star Alice had made a death pact with his loving wife Sheryl in June 2019, declaring,

I couldn’t live without her. We always said there will never be a time when one of us will be mourning the other

Sheryl Goddard and Alice Cooper always seemed a happy couple. However, she filed for divorce against her husband in November 1983. The reason was reportedly the height of Cooper’s alcoholism but by mid-1984, Sheryl and Cooper reconciled and the couple is together since then.

Sheryl Goddard's Age And Other Facts