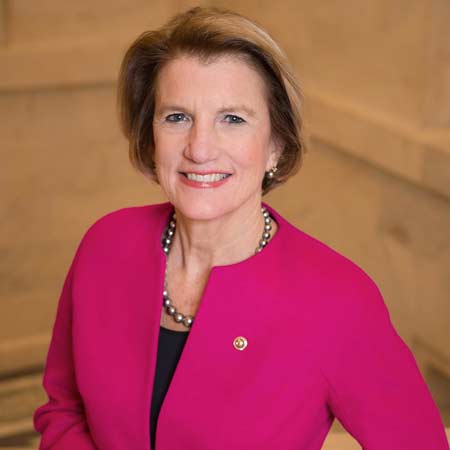 Daughter of the politician father Arch Alfred Moore Jr., the U.S Senator Shelley Moore Capito is the first female senator in the West Virginia to win the general election with the huge 62 percent margin. The Republican successfully served as the U.S. House of Representatives for West Virginia for 14 long years. Known for her bipartisanship policy, Capito has had mixed reviews regarding several political and social issues including healthcare, abortion, and many others.

Inspired by her parents, Shelley Moore Capito began her political career in 1996 when she was elected as the 31st district of the West Virginia House of Delegates. She served from December 1996 to the December 2000 and was named Minority Chairman of the Health and Human Resources Committee and a member of the Judiciary, Banking and Insurance Committee.

In 2000, Capito ran as a Republican in the open seat in West Virginia's second district. After defeating the lawyer Jim Humphreys, she became the first Republican to represent West Virginia in Congress since 1983.

In 2002, the politician won the re-election to a second term again defeating Humphreys in re-match 60%-40%. In that re-election, she won every county except Braxton becoming first West Virginia Republican to win re-election to Congress after her father Arch Alfred Moore Jr.

Capito again won the re-election to the third term defeating the newscaster opponent Eric Wells by 57%-42% in 2004. Then after in 2006, she ran from her house election for the re-election and had a victory over Mike Callaghan, Environmental Protection Secretary by 57%-43%.

Continuing the victorious journey, Capito again won the re-election by defeating Senator Robert Byrd in 2008 and Virginia Lynch Graf in 2010. In the year 2010, Capito won in all the 18 counties of the district for the first time. For the 2012 election, the politician defeated the delegate, Jonathan Miller, and Michael Davis and subsequently won the 7th term re-election with a victory of 70%-30% against the opponent Howard Swint.

Following the undefeated journey, Capito went on winning the 2014 general election defeating the Democratic Secretary Natalie Tennant with the large victory margin of 62%-35%. For her liber political beliefs and bipartisanship, she eventually became the favorite in the general election.

Shelley Moore Capito has had a successful political career and was named the third most moderate Republican Senator by The New York Times in 2017. As per the GovTrack's analysis, the politician is more moderate than 30 of her Republican Senate colleagues and also more conservative than many others.

The Junior Senator Capito has had mixed reports for most of the political and social issues. Capito was concerned about the president Donald Trump's tone and rhetoric during the election and said Trump should re-examine his candidacy. But later on, she said, she supported Trump in the election.

Senator Capito has had mixed perception regarding the LGBT community. Previously, she intended to ban same-sex marriage in the U.S. but later she supported the Violence Against Women Reauthorization Act which a s sisted the victims regardless of their sexual orientation. In 2015, she voted for an amendment to the Runaway and Homeless Youth Act which provided support and protection for the LGBT youth.

Capito is also a supporter of the pro-choice movement to legalize the abortion service. She has described herself as pro-choice but she holds mixed records about the issue of abortion having voted for few moderate pro-life bills and also for the expand research on human embryonic stem cell lines and fund contraception.

Happy #LaborDay to all the hardworking men and women in #WestVirginia who work day in and day out to power our economy and keep our state moving forward. pic.twitter.com/IHh5nW873U

The politician is a supporter of Gender Advancement in Pay (GAP) and advocates equal pay for equal work. Capito is concerned about sex discrimination against women in the workplace. Also, she is working with Kristen Gillibrand to stop sexual a s saults on colleges. The two are partnering to sponsor the Campus Accountability and Safety Act to reduce the sexual violence on campuses.

In 2016, the politician was a possible contender for the vice president on the Republican ticket with Donald Trump as she was one of the senators to meet the president in the Washington D.C. But later, the Governor of Indiana Mike Pence was chosen for the job.

Capito is one of the celebrated politicians with a decorative political history. From her successful career, she is earning a decent amount of money. However, there are mixed reports about her estimated net worth. As per a reliable source, she has an estimated net worth of $3.43 million in 2015.

In the United States, a delegate to the House of Representatives is paid the salary of $174,000 as of 2018. Being a delegate, Capito must have been receiving the same amount of money from her occupation.

Currently, Capito resides in Charleston along with her husband Charles L. Capito. The couple is grandparents to the six grandchildren; Celia, Charlie, Eliza, Rose, Arch, and Macaulay.

The famous politician is living a low-key private life and is mostly occupied by her professional issues which left her very little time for personal affairs.

Here's a video of Shelley Moore Capito in the show Morning Joe.