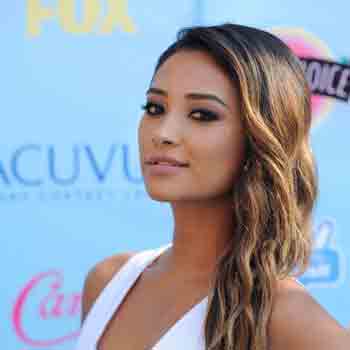 Shannon Ashley Mitchell, known as Shay Mitchell is a Canadian actress and model who is best known for her roles as Emily Fields in the ABC Series Pretty Little Liars. She has been active in her occupation since 2009.

Shay Mitchell was born in the year 1987 April 10 in Mississauga, Ontario, Canada to a Filipino mother, Precious Garcia and Irish/Scottish father Mark Mitchell. They both work in finance.

Mitchell has a younger brother named Sean and she is the second cousin of singer and Tony Award-winning theatre actress Lea Salonga, who is known best for her role of Kim in musical Miss Saigon.

Since her kinder age, she wanted to involve in performing arts and had declared it to her parents that she would pursue her career in it. Following her dreams, she began dance lessons at the age of five.

When Shay Mitchell turned 10, her family moved to Vancouver, British Columbia. Within a year shift, a modeling agency held an open call for teen and pre-teen girls for representation where she was one of the selected girls.

Shay Mitchell had successfully been modeled and done a photoshoot for various companies in the cities of Bangkok, Hong Kong and Barcelona by her late teens. She has been a success in her early age.

However, she returned to Canada to study acting. Like many others, before she has been successful in modeling and acting, she had worked in a clothing store for a short time.

In 2009, Shay Mitchell made her debut in acting from the Canadian teen drama series Degrassi: The Next Generation and also played in several adverts. She was the guest star in the Global series Rookie Blue.

In 2009 December, Shay Mitchell gave an audition for the role of Spencer Hastings in the ABC Series Pretty Liars but she was picked for the role of Emily Fields. Pretty Little Liars is the story based on a book series which centers on the four friends who are against an anonymous for threatening to reveal all their secrets whilst unraveling the mystery of the murder of their best friend.

In 2010, she performed in the several episodes of the Disney XD series Aaron Stone and featured in the music video of Sean Paul for “Hold my Hand.”  In 2011, she became the spokesmodel for the Pantene Haircare products. Shay Mitchell is currently involved in the shoot of the fourth season of Pretty Little Liars.

Shay Mitchell's Net Worth And Salary

Shay Mitchell's net worth is $4 million at present. She has earned a decent amount of salary from her career. She has appeared in an episode of the TV series such as Degrassi: The Next Generation, Pretty Little Liars, Punk'd, Glee, and Rookie Blue.

She has worked in the movies such as Verona, Just Yell Fire: Campus Life, Immediately Afterlife, Dreamland, Mother's Day, and Cadaver. The movie, Mother's Day grossed $48.4 million at the box office.

Talking more about Shay Mitchell, she has been a successful one. She has the hourglass-shaped hot body measuring the size of 32-24-33 inches. She stands the beautiful height of five feet and eight inches tall and has the body weight of 55 kg. Her hair is naturally black but has dyed it for ombre hair.

She is stunning and gorgeous. She has a pair of sexy and toned legs that has added charm to her beauty. Shay Mitchell is admired and adored by many of her fans. She is the winner of 2011 Young Hollywood Awards and been nominated for 2014 Teen Choice Awards.

Talking about the personal life of Shay Mitchell, she is currently dating her boyfriend Ryan Silverstein. The two of them started dating in 2013. In 2011, Shay had an affair with the singer Carlos Pena which did not last for long.

However, some of the rumor had arisen on her sexuality if she is a gay/lesbian after her role in Pretty Little Liars where she kisses her co-actor. It is completely vague and part of the story in the series. Shay Mitchell is a good friend of Naya Rivera who is a singer and an actor.

Fans of Shay can follow her on Facebook and Twitter to get updated with her current activities and also can go through different internet websites to have much more detailed information on her including Wikipedia which locates biography and picture of her.