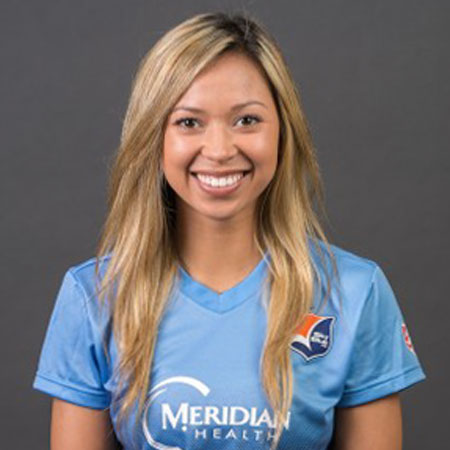 Shawna Gordon, 28, is an American soccer player. She currently plays for Sky Blue FC in the National Women’s Soccer League as the midfielder. Before involving in the National team, she also played for the Boston Breakers followed by Western Sydney Wanderers in Australia, and Umea IK. She rose to fame after her relationship with actor and model Shemar Moore from 2014 to 2016

Shawna Gordon was born on January 18, 1990, in Fontana, California, United States of America, under the birth sign Capricorn. She belongs to American nationality and mixed descent. Gordon spent her childhood in the nearby city of Rancho Cucamonga.

Shawna Gordon attended Los Osos High School. She was interested in playing soccer from her high school days and also played for the varsity soccer team for four years.

After completing high school, she moved to the California State University, Long Beach, where she did major in business and communications.

Shawna Gordon was also a team member of Long Beach State 49ers from 2008 to 2011 while she studied at the California State University. In 2011, the team advanced to the NCCA Elite Eight for the first time, that year she was named Big West Conference Midfielder of the year.

She signed for the inaugural season of the National Women’s Soccer League with Boston Breakers in 2013, she couldn’t make an appearance in the competition.

Who are your top 3 hip hop artists!?! Hit the link in my bio for current playlist and full feature for @beatsbydre!

Shawna Gordon moved to the Western Sydney Wanders FC after completing the National Women Soccer League’s 2013 season. There, she played for Australia’s W-League from 2013 to 2014 season. She then was announced W-League Player of the Week for her win over Perth Glory FC by 3-0.

Shawna Gordon moved to Umea IK for the 2014 season of Sweden Damallsvenskan. There she played six matches for the club. After that, she signed with the National Women Soccer League side Sky Blue FC in New Jersey. Shawna Gordon played 13 games for the Sky Blue FC.

Shawna Gordon has also represented the United States on the under-17 national team. In 2008, she was called a training camp for the Under-20 selection.

Shawna Gordon is supposed to hold the net worth of around $1 million which she has collated from her sport as well as modeling career. Her annual salary is $85K.

Shawna Gordon stands at the height of 1.68 meters i.e. 5 feet 6 inches. She has an athletic body and looks very fit and fine with her an hourglass figure and brown hair.

Shawna Gordon is possibly single at the present, and yet to be married.  She was dated Shemar Moore in 2015. Her ex-boyfriend, Shemar Moore, is an American actor and former fashion model who is best known for role in The Young and the Restless as Malcolm Winters.

The former couple was spotted together in several public places of Los Angeles like clubs and parties. At the time of their relationship, they attended 'The Ellen Show'. After her break up with Moore, she has not been rumored or linked with any guys.

Prior to her relationship with Moore, she also dated some other hot Hollywood divas. But his most hyped relationship was with Toni Braxton and Halle Berry.

Moore is said to be busy dating Real Housewives of Atlanta star Phaedra Parks. Besides, she seems to be quite close to a kid, based on her Instagram activities. The cute boy appears to be her sister’s son. Going by the affection she has showered for the little one, we can say that she can be a great mom in the future.