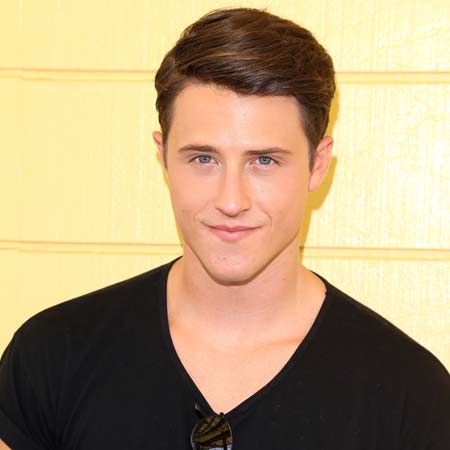 The multi-talented actor Shane Harper has tried his hands in various fields such as acting, dancing, and singing. Harper gained real limelight after his incredible performance playing the main role in a 2014 successful movie God's Not Dead. The actor is also known for his role in Good Luck Charlie, Awkward, and Wisdom of the World. He is also blessed with distinctive and unique voice. Harper was in a relationship with singer and actress Bridgit Mendler.

Born in La Jolla, California, United States, on February 14, 1993, Shane Harper is the son of Tanya Harper and Sullivan Harper. He was raised in a family of performers as his older sister Samantha Harper is also a professional dancer and his younger brother Sullivan Harper found work as a model.

Harper's nationality is American and regarding his ethnicity, he is of mixed ethnical background as he is of Austrian, German, Jewish, and Scottish descent. As a child, he showed potential in many fields. At the very early age of 9, Harper started studying martial arts and obtained a black belt in karate, when he was 12.

After a few years, Harper developed an interest in the entertainment industry and began singing, dancing, acting, as well as playing the guitar and piano. He also took ballet, hip-hop, lyrical, jazz, and tap lessons. In the spring of 2006, the multi-talented personality got an agent at a regional dance competition, after studying dance formally and showcasing his talents at a local community theater.

Shane Harper made his professional transition in the field of acting at the age of 13 playing the small role as a principal dancer in various shows and movies, including High School Musical 2 and Dance Revolution. He subsequently snagged a leading dance character on the Nickelodeon's Dance on Sunset.

In 2010, Shane played his first feature film roles in a 2010 Indian drama movie My Name is Khan and American romantic movie Flipped. The two minor roles opened many doors including a recurring role on the Disney Channel sitcom Good Luck Charlie alongside Bridgit Mendler. He later earned guest spots on an episode of Wizards of Waverly Place and So Random!.

Harper reached the pinnacle of his career and gained much critical praise following his breakout role in one of the commercially profitable movies of 2014 God's Not Dead. Although the movie earned negative reviews from the critics, it triumphantly grossed a whopping box office collection of $62 million on a $2 million budget.

In 2016, Harper appeared in the musical television special The Passion. The following year, he appeared as a charming waiter Robbie in the TV film Dirty Dancing which premiered on May 24, 2017, on BBC.

In addition to his acting and dancing, Harper is also a successful musician who has a distinctive and soulful voice. On March 30, 2010, he released his first single under the title Dance with Me, a danceable teen-pop. In February 2012, he released his debut self-titled album under A.M.I. Records.

It was announced in 2016, Harper signed a record deal with Capitol and released an EP titled Like I Did on 27 May. His music has likewise found its way into his acting as he wrote and recorded the faith-themed song called Hold You Up for his film God’s Not Dead. In 2018, he featured in God's Not Dead: A Light in Darkness.

Some hit television series are listed below.

Shane Harper showed his versatility in many fields. The God's Not Dead star has also earned a decent amount of money from his multiple professions as well but the exact amount of net worth is still under wraps which as per some reliable online sources is believed to be more than $2 million.

In 2014, Harper played a major role in Christian drama movie God's Not Dead which turned out to be commercially successful as it made $60.8 million in North America and $3.9 million in other territories for a total of $64.7 million, against a budget of $2 million.

Harper is also simultaneously running his two YouTube channels. His YouTube Channel ShaneHarperVEVO has more than 100k subscribers as of May 2018 and earns in the range of $302-$4.8k in a year from the channel. And his self-titled YouTube channel has over 165k subscribers.

As of now, Shane Harper is not dating anyone officially. But the actor was in a brief relationship with actress and singer Bridgit Mendler in 2011. The Hollywood couple started dating on 20th May 2011. Harper and his ex-girlfriend Mendler were also often spotted together at various events.

Despite their loving and long relationship, Mender made an official announcement regarding their break-up at the beginning of November 2015. Besides, the actor is also active on social media with a considerable fan following.

me and my manager @goblueadventures

Harper also loves traveling and often posts his photos going to different destinations on his Instagram account. He is also a devotee of Christian.

In an interview, Harper talking about his role in a 2018 movie God's Not Dead: A Light in Darkness.