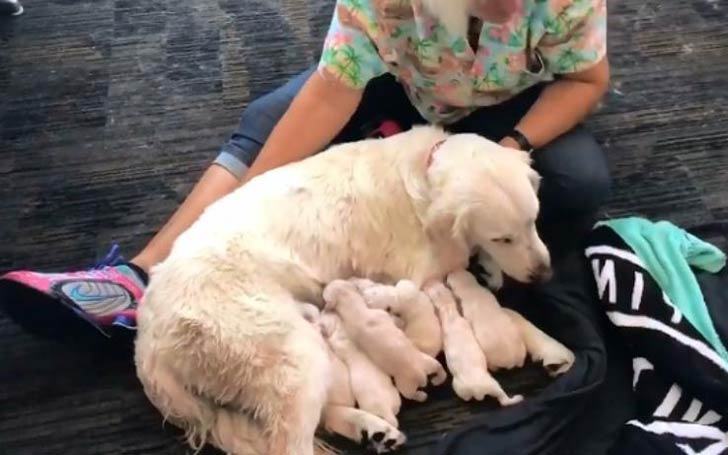 Diane Van Atter had been waiting for a flight to Philadelphia when her service dog Ellie went in to labor and gave birth to eight cute puppies at an airport in Tampa, Florida.

Ellie, Eleanor Rigby, the two-year-old yellow labrador in training unexpectedly gave birth on Friday, 25th May where city paramedics helped it with delivery. 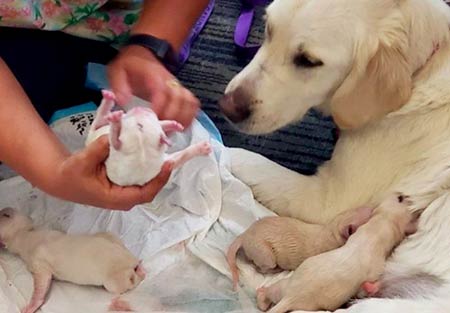 CAPTION: A service dog delivers 8 puppies while waiting at an airport SOURCE: Unilad

Atter's stepmother Karen James told the Tampa Bay Times they knew Ellie was pregnant but she delivered earlier than expected which might be because of the excitement of the airport.

Ellie brought seven males and a female into the world in the middle of the airport while the crowd smiled and cheered. According to USA Today, the puppies' father, Nugget is also a service dog and was among the onlookers at Tampa International Airport's Gate F80.

The Tampa Fire Rescue announced the sudden delivery of Ellie on Twitter where they reported Ellie was assisted by city paramedics. They gave time to time update in the delivery of all eight puppies on Twitter Friday afternoon.

Meanwhile, some of the puppies were named after the paramedics who helped with the delivery. "Number two is Larry," told Tampa Fire Rescue's Larry Glanton with a smile.

A crowd of passengers missed their flight and watched Ellie bringing her angels to this world and created a fuzzy spectacle for next three hours where many were trying to capture the moment on their phone.