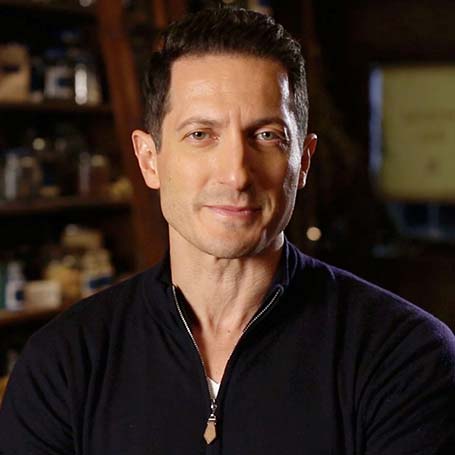 The Israeli-Canadian actor Sasha Roiz gained huge fame after his breakout role as Captain Sean Renard in dark fantasy TV series Grimm. He is also credited for his work in science fiction television series Caprica. He has also appeared in many successful movies like The Day After Tomorrow, Land of the Dead, and more.

Sasha Roiz was born in Tel Aviv, Israel, on October 21, 1973, to Russian Jewish parents. He has a brother named Elan Roiz. He along with his family moved to Montreal at the age of 6. He belongs to Israeli and Canadian nationalities while his ethnicity is mixed.

After his passion for theater which developed quite early in his life, Roiz studied history in Montreal. This was after he became the part of a rock band named Tricky Woo as a drummer.

Roiz made his way to England and graduated from the  Guildford School of Acting in Guildford.

Sasha Roiz made his debut playing the role in an episode of the TV series Largo Winch in 2001. After playing the supporting role in one of super box office hit movie The Day After Tomorrow brought him worldwide popularity. It was his feature film debut too and in which, he shared the big screen along with Dennis Quaid, Jake Gyllenhaal, Emmy Rossum, and Ian Holm.

Roiz later landed in a number of major roles in countless projects which include Assault on Precinct 13, Land of the Dead, Man of the Year, and more. Prior to movies, the actor also featured in numerous hit TV series like Show Me Yours, G-spot, Jeff Ltd, CSI: Miami, and Across the River to Motor City as well.

In 2010, Roiz was cast in the TV series CSI: Crime Scene Investigation which earned him strong reviews. In the following year, he went on to share screen alongside Esai Morales and Paula Malcomson in the Caprica.

In 2019, Sasha played the role in the TV series Lucifer and Suits.

Sasha Roiz with dozens of breakout roles in both movies and TV series has collected a decent amount of net worth which is around $1 million.

In 2004, Roiz played the role in the science-fiction disaster movie The Day After Tomorrow which became a huge hit at the box office racking up over $544 million from a $125 million budget and became the 6th highest grossing film of 2004.

Sasha Roiz is openly gay. Following his role as Caprica led to speculations regarding his real sexual orientation. He later himself revealed when he got the role in the TV series it was as a chance to explore the relationship between a gay character.

The actor once said:

A lot of my friends are gay, and certainly I have no tolerance for anyone who has any sort of ignorance or restriction on people’s lives or love lives

Prior, Roiz was in a relationship with Asha Leo. The two started dating in 2012 and broke up after a year, though there were rumors of them exchanging wedding rings. After that, he has kept his romance very secret.

He is also an animal lover who has a little cute and an adorable dog named Bernie The Pooh.