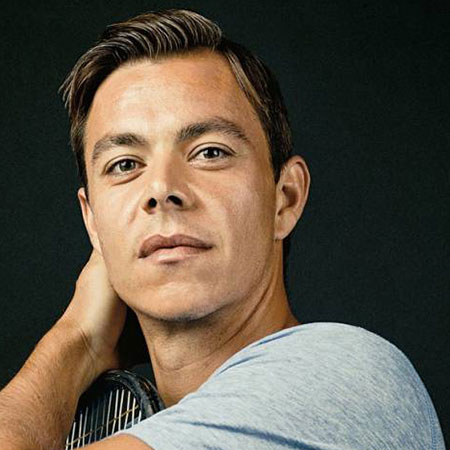 Aleksandar Bajin is a former German professional Tennis player and tennis coach mostly known as Sascha Bajin. He served as the former Victoria Azarenka's Coach and was former Hitting Partner of the American player Serena Wiliams. As of 2019, he is the coach of a Japanese Tennis Player Naomi Osaka.

Born as Aleksander Bajin in Munich, Germany on 4th October 1984.  He belongs to German nationality and is of White-Caucasian ethnicity. Sascha was raised alongside his younger brother in Germany.

He enrolled and graduated from Palm Beach State College. Later he moved to the United States to pursue a career in Tennis. Besides this, information about his parents, siblings, family, and childhood is not revealed to the public as he keeps it under wraps.

Bajin's Career, Net Worth And Earnings

Sascha started playing tennis at the age of 6 and with time his interest in tennis grew. He has also played in the 2nd Tennis Bundesliga for Iphitos Munich.

Since 2007, he became the Hitting partner of Serena Williams for eight years. Under his training, Serena won 13 Grand Slam singles titles and also won the Gold medal in doubles at 2008 Beijing Olympics and doubles Gold Medals at the 2012 London Olympics.

Since 2015, Sascha worked as Victora Azarenka's hitting partner. He helped her win three titles in 2016 and three quarterfinals appearances at the Slams.

Currently, he is working as a coach to Japanese Tennis player Naomi Osaka. She was able to win the Grand slams singles under Sascha's guidance.

In late December, Bajin was named The Coach of the Year by the Women's Tennis Association.

The 33-year-old former player and coach has managed to earn a fortune from his tennis career. Although his salary is not disclosed yet, sources estimated his net worth to be around $6 million.

The average salary of a tennis coach ranges from $46,648 dollar national average to $70,000 dollar annually. We can assume that Bajin is paid near or above average regarding his experience.

Bajin is not married, however, is very secretive regarding his personal life and keeps it away from the spotlight.

He was rumored to be in a relationship with model Federica Rivolta. The pair was spotted together in public few times, however, the pair never confirmed the news. Besides this, information related to his marriage, past affairs, girlfriend are not available to the media.

Bajin is active on Instagram with over 6k followers, likewise, he has over 26.4k on Twitter. He is not active on Facebook however, there are many fan-made accounts under his name.

Here is a video of Sascha Bajin talking about Life as a coach.