Sarah Sokolovic is an actress who shot to fame after her work in a number of theatrical plays. She is credited for her work in the television series The Good Wife and among others. She made her biggest breakthrough after portraying Tori Bachman in the hit TV series Big Little Lies. Besides, she has also worked in movies like Cold Comes the Night and Every Secret Thing.

Sarah Sokolovic was born on November 30, 1979, in the United States of America. She is the daughter of Dimso "Dan" Sokolovic and Donna Stowell. She is an American as per nationality and ethnicity wise; she has a mixed ethnical background as her father is of Serbian descent who immigrated to the United States from Germany while her mother is of German and English descent.

Sokolovic also has a sibling-sister named Stephanie and a brother named Steven. In the year 2011, she completed her graduation from the Yale School of Drama.

Sarah Sokolovic initially performed in numerous plays. She was nominated for the Drama Desk Award for his performance in the musical The Shaggs: Philosophy of the World at Playwrights Horizons.

A theater veteran, Sokolovic made TV debut appearing in the TV series Unforgettable, in 2011. The following year, she featured in The Good Wife. In 2013, Sarah landed her first movie role portraying Gwen in Cold Comes the Night. She was nominated for 22nd Screen Actors Guild Awards for her work in Homeland. 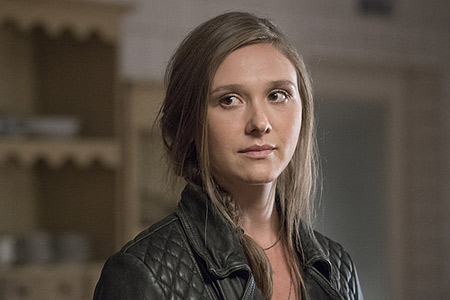 The actress gained widespread popularity after she joined the cast of TV series Big Little Lies, in 2017. She played the role of Tori Bachman in the series along with Reese Witherspoon, Nicole Kidman, Shailene Woodley, Alexander Skarsgård, Adam Scott, and Zoë Kravitz.

In 2018, Sokolovic also featured in Timeless, Code Black, and MacGyver.

Sarah Sokolovic has earned a considerable amount of money. As per estimation made by various online sources, her net worth is estimated to be around $1 million. Her major source of income is her work in movies and TV series.

The actress has worked in many successful TV series, but her salary is still missing.

Sarah Sokolovic is yet to be married and is also not dating anyone at present (pubically). It has been nearly eight years that the actress is in the limelight but has never talked about her boyfriend, husband, and love life.

Sokolovic is also inactive on social media, which is why it becomes much hard to know further about her personal life.