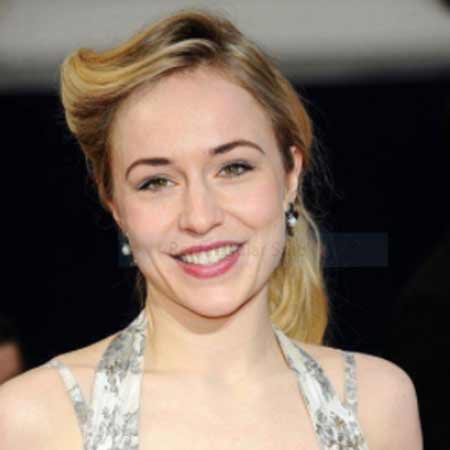 Best known for portraying the role of Betsey/Lindsay in Royal court Theatre's production of Clybourne Park, Sarah Goldberg is a talented actress who has come through the ranks of theatre acting from Canada to historical Shakespearean city London to the busy shores Hollywood.  For her standout Portrayal of Betsey, she was nominated for Oliver award and also got her ticket to join the Broadway Company.

Besides her theatrical performances, she has also performed in television series Hindsight, Barry and Christopher Nolan's Billionaire club movie The Dark Knight.  As of 2018, Sarah is working in the upcoming thriller movie  The Hummingbird project along with Salma Hayek.

Sarah Goldberg was born in Vancouver, British Columbia, Canada on May 31, 1985, under the birth sign Gemini. Her nationality is Canadian and belongs to white ethnicity.

She was interested in acting from her early teen years and at the age of 18, she moved from Canada to London in the hope of carving her acting career. She then joined London Academy of Music and dramatic art. She also auditioned for the role of Juilliard at the age of 17, but she was rejected.

Apart from Clybourne Park, her other notable major projects in London Theater includes Miss Lily Gets Boned,  Apologia and Six Degrees of Separation.  She has also portrayed the role Alison Porter in Sam Gold's off-broadway revival Look back in Anger in 2012 which was also her Newyork Broadway debut.  She has also worked in television series Hindsight and Barry. In the Christopher Nolan's movie The Dark Knight, she portrayed the role Analyst #1. As of 2018, Sarah can be seen in the movie The Hummingbird project alongside Salma Hayek, Jesse Eisenberg, Michael Mando, and, Alexander Skarsgård.

Sarah Goldberg's net worth is estimated to be in millions, but the actual amount is still under review. She has worked in various hit movies including The Dark Knight with a production value of $250 million which earned a total of $1.085 Billion.

Her salary during her time on Broadway is estimated to be more than 1,605 U.S dollars, and for acting in television series, she may get estimated 15,000 to 20,000 USD per episode.

Apart from being a famous theatrical actress, Sarah likes to keep her personal life secret. There were rumors Sarah dating English actor John Light. Both were together in Oliver award ceremony when Sarah was nominated for her role in Clybourne Park. But the relationship never materialized, or it never surfaced in the limelight.

The whereabouts of Sarah's family and her social media accounts are also not revealed till date, but in an interview, she revealed that her grandparents were Jewish and moved from Poland to Canada during the Holocaust.