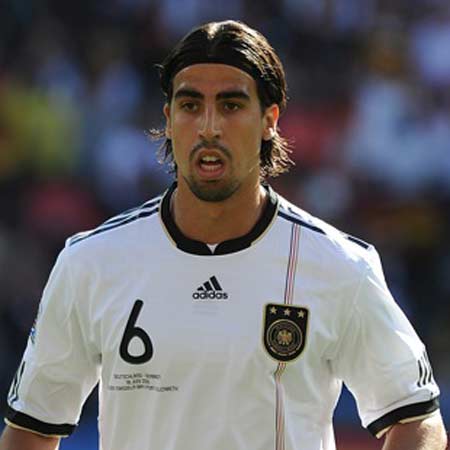 Sami Khedira is a German footballer playing as a central midfielder for the club Juventus F.C. and Germany national team. Khedira made his career debut in 2007 at VfB Stuttgart by winning the Bundesliga. Later, he joined Real Madrid for the five seasons winning several domestic and international trophies, including the UEFA Champions League. He made his full international debut in 2009 and earned more than 70 caps for the team and was the part of the squad which represented 2010 and 2014 FIFA World Cup and 2012 and 2016 UEFA European Football Championships. He represented Germnay in the FIFA World Cup  2018.

Sami Khedira was born on 4th April 1987 in Stuttgart, West Germany under the birth sign Aries. Khedira is German by nationality and belongs to  German-Tunisian descent. His German mother and a Tunisian father raised him with his siblings, Rani and Denny Khedira. His brother Rani plays for  FC Augsburg and also represented his home country U-19.

Initially, he played at TV Oeffingen.

Sami Khedira joined the youth team, VfB Stuttgart in 1995. Khedira was called up into VfB’s Bundesliga squad by Armin Veh, the manager in the first month of the 2006-07 season. He made his debut for the club on 1st October 2006 against Hertha BSC replacing Antonio da Silva un 2-2 draw match.

On 29th October, he scored his first goal in 3-0 win match against Schalke 04 at the Mercedes-Benz-Arena. On 29th January 2007, he signed a professional contract with the team. Throughout his career, he scored 16 goals appearing in 132 games.

Khedira joined the Spanish professional football team, Real Madrid for undisclosed signing amount on 30th July 2010. He made his debut for the team in a friendly match against Bayern Munich in 4-2 winning match for the Franz-Beckenbauer-Cup on 13th August 2010.

On 18th October 2011, he scored his first competitive goal in the Championships League against Olympique Lyonnais. He alters, scored his first Copa del Rey goal against Malaga CF in a 3-2 home match.

On 9th June 2015, Khedira signed a four-year contract deal with Juventus on a free transfer. He made his Serie A debut on 4th October 2015 against Bologna scoring the final goal of the 3-1 home win.

Very important victory. Good to be back on the pitch! SK6 #forzajuve #finoallafine

Khedira made his 100th appearance for the team against Tottenham in the UEFA Championship league on 7th March 2018 assisting Gonzalo Higuain’s goal. The team won the match with the score 2-1.

Sami Khedira represented the German national youth team 30 times. During the 2009 European Under-21 Championship, he was a captain of the team. The team won the match against England scoring 4-0.

On 5th September 2009, Khedira made his senior national squad debut in a friendly match against South Africa where he was substituted for Simon Rolfes.

For the 2010 World Cup, Khedira was called up to the German squad by coach Joachim Low replacing the injured central midfielder, Michael Ballack.

Khedira was questioned for his participation at the 2014 FIFA World Cup after he tore his ACL in his right knee. He, however, recovered soon after and played the team’s opening match, 4-0 win over Portugal.

Khedira is selected as 27-man Germany squad for the 2018 World Cup as a midfielder.

For Euro 2012, he played in eight qualification matches and later helped the national team to make the record of ten wins out of ten matches. In the final match, the team scored the 4-2 win over Greece and became the Team of the Tournament.

Sami Khedira has an estimated net worth of $60 million as per Celebrity Net Worth. Khedira earns the salary of €5 million ($5.91 million). His current market value is €28 million ($33.10 million).

What a great ride! Just parking the car to get ready for team practice! #forzajuve #training

Khedira is the founder of ''Sami Khedira Foundation'' which supports projects in favor of disadvantaged children and young people. The foundation encourages the young people to achieve something in their life.

Sami Khedira is single in the current days. Previously, he was linked to Brazilian actress and model, Adriana Lima who is recognized as ‘’the most attractive woman in the world.’’ The couple, however, never revealed regarding their alleged relationship. As of 2018, Lima is dating Metin Hara.

Prior to Lima, Khedira was in a relationship with German fashion model and TV host, Lena Gerck. 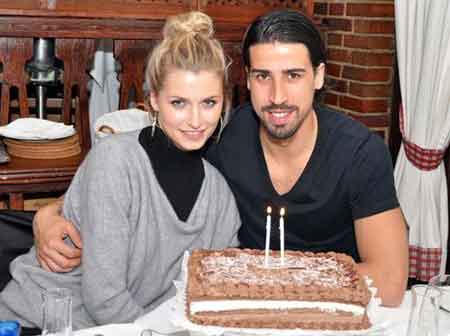 The couple started dating in 2011. After dating for years, they announced their break up stating,

‘’ Together we decided to take different paths. It was not an easy decision, so we expect people to respect our privacy. Please do not ask all of the details that will not be disclosed to the public.’’

During the match against Lazio in 2015, Khedira suffered a hamstring injury, excessive tear of muscle fiber. He also faced an injury in the first half of quarter-final in Euro 2016 while playing against Italy.

Despite his playing skill and physical ability, he is known to be an injury-prone.

Here is the video which shows the skills and goals of Sami Khedira: