Sam Daly is an American actor who came in the fame for his debut role in 2007 movie The Education of Charlie Banks. He made his big break after taking a role in the hit TV series The Office. The actor currently stars in Madam Secretary.

Sam Daly was born on March 24, 1984, in Providence, Rhode Island, the United States of America to the power couple Amy Van Nostrand (mother) and Tim Daly (father). Her father Tim is one of the leading faces in the world of acting who has also worked as a producer for many hit projects. His mother Amy is also an actress.

Daly has a sibling-sister named Emelyn Daly, an actress too. Regarding his nationality, Sam is an American and belongs to White ethnicity. He belongs to the family of multi-talented as her aunt Tyne Daly is an also actress winning six Emmy Awards for her work in both movies and television series.

Daly completed his schooling from Moses Brown School. He later graduated from Middlebury College in Vermont. At that time, he briefly played basketball and even became the captain of their senior year team.

Sam Daly kick-started his acting career appearing as a Kenny in a 2004 TV series Bereft. The actor made his silver screen debut playing the role of Owen in a 2007 movie Education of Charlie Banks along with Jason Ritter, Eva Amurri, Gloria Votsis among others.

A year after, Daly went on to portray Will in the medical drama hit series Grey's Anatomy along with Ellen Pompeo, Sandra Oh, Katherine Heigl, Justin Chambers, and many more. Subsequently, the actor made his appearance in many movies like Justice League: The Flashpoint Paradox, Black Road, Office Uprising, and others. 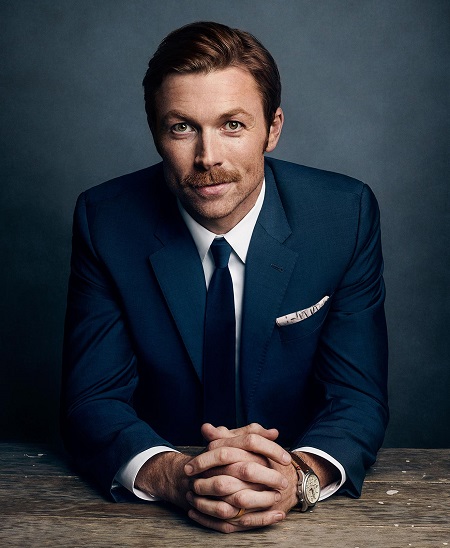 From 2009-10, Daly was a cast in The Office. He has been portraying Win Barrington in the most hit TV series Madam Secretary. In 2019, he also appeared in the film Before Throat City. He will shine in Cut Thraod City and Fatale.

Sam Daly's numerous movies and television series' role has not only brought him fame but garnered him a considerable amount of money too. As of 2019, according to some reliable sources, his estimated net worth is around $1 million.

On the other hand, his father Tim has a net worth of $10 million. He has a house in Upper West Side, New York City.

Sam Daly is a married man. He tied the knot with wife Marissa Bataille in 2015 in a private wedding ceremony. The couple is blessed with two children. The love birds welcomed their first child, a son named Owen James Daly, on March 5, 2017.

And then my heart exploded Introducing Hudson Louis Daly. Born 2/28/19 at 1:47am. 6lb 13oz and 19.75in. Just like your mom, you are PERFECT in every way! I am here to tell you that you will be loved every day of your life and i am lucky to be your dad. Thank you for choosing your mom and me. @hudsonlouisdaly #pisces #love #birthday

Bataille gave birth to their second child, son Hudson Louis Daly, on Feb 28, 2019. The actor has posted many photos with his newly born baby boy on his Instagram account. Judging by their social media, the couple seems much in love and sharing the happy married life.