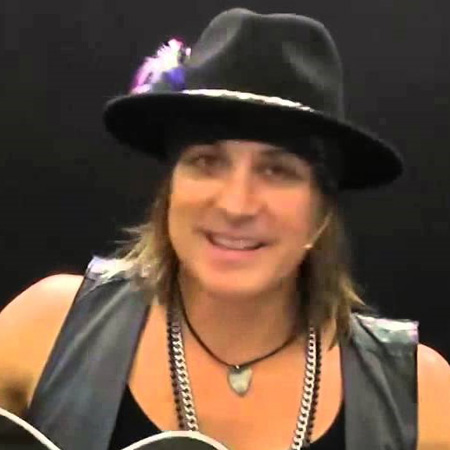 Ryan Roxie is an American singer, guitarist, and songwriter, well known for his guitar credits with Slash's Snakepit and Alice Cooper.

Ryan Roxie was born on 1st December 1965, in Sacramento, California and was raised in the East Bay in Pleasanton. His mother was a drummer in her high school marching band, and his father is Polish who played trumpet at that time.

At his age of five, Roxie played guitar but he had more interest in drums. When he was around his age of eleven, Roxie began taking guitar seriously.

Ryan learned to play guitar from an old record player and made his own form of scratching, testing many records in the process and did some guitar skills. Roxie was profoundly influenced by evergreen albums like Van Halen and also has several guitar idols including Steve Stevens, Brian May, Neil Geraldo, Elliot Easton, and Rick Nielsen.

In 1985, the band released the album called 'Whatever Happened to Fun.' Later Gilby again replaced Kyle Vincent as lead vocalist, and Ryan was introduced to the band as lead guitarist.

In 2000, Ryan recorded his debut studio album with Alice Cooper titled Brutal Planet. From 2000-2005, he worked with Cooper on various albums including, The Eyes of Alice Cooper, Dirty Diamonds, and Dragontown, with some songs, co-wrote by Roxie.

In 2012, Ryan Roxie reunited with Alice Cooper for the fourth tour. He joined Orianthi and Tommy Henriksen on guitar, Glen on drums and Chuck Garric on bass.

Roxie formed a group named R77 in 2002 and wrote songs as he was influenced by the Beastie Boys and The Beatles. Roxie released a six-song EP in 2014, titled The Ameriswede.

Since 2016, Roxie appears as a host for a web-based Blab show titled Big Rock Talk. The show also stars special guests interviews along with music videos.

Roxie seems single currently, as he has not been encountered having any kind of affair or dating girlfriend. He might be in a relationship, but it is still a mystery.

Previously, Ryan Roxie was in a relationship with Kendra Jade, a Puerto Rican adult-movie star.

Ryan Roxie earns an enormous amount of money from his successful career as singer, guitarist, and songwriter, as he has given numerous indie rock and pop songs which are still a huge hit.

He has also earned much money while playing for Alice Cooper. As 2017, Ryan Roxie's total net worth is $ 7 million.