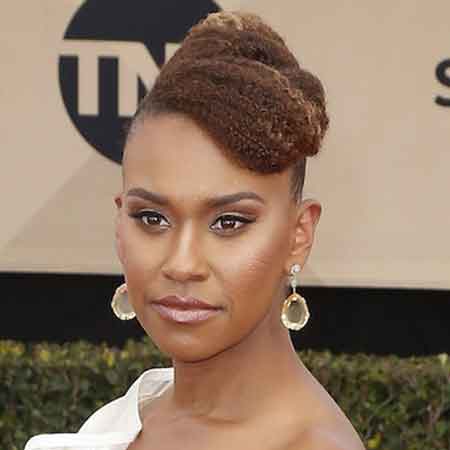 American actress Ryan Michelle Bathe is known for her appearance in the ABC television series Boston Legal. She is happily married to Sterling K. Brown and the two are regarded as one of the adorable celebrity couples of Hollywood due to their strong and inseparable relationship. Bathe also starred on the small screen along with her husband in the series Army Wives.

Ryan Michelle Bathe was born on 27 July 1976 in St. Louis, Missouri. She grew up in Stamford, Connecticut. Her zodiac sign is Leo, according to her birth sign, she is a funny and sincere person.

Bathe completed her high school degree from Westhill High School in Stamford. She attended Stanford University for her college education. Later she joined New York University and graduated with a degree in Master of Fine Arts.

At the beginning of her acting career, Bathe did several guest appearance role on the various television shows such as How I Met Your Mother, ER, Half & Half, and others.

She got her big break in 2005 in the American legal comedy-drama television series Boston Legal. She portrayed the role of a junior a s sociate Sara Holt in season 2. From 2009 to 2010, she starred in a recurring role in the Trauma.

In 2011 Bathe was cast on an American sitcom Retired at 35. She played the role of Jessica Sanders in season 1. Alongside the small screen, she also appeared in some independent films including All About Us. The actress was cast as Jackie on the big screen crime comedy film One for the Money in 2012.

She appeared on a recurring role in another television drama series Army Wives. In the series, Bathe was cast opposite to her real-life husband Sterling K. Brown. In 2014, she had a lead role in the comedy pilot Keep It Together.

Bathe was cast as Yvette in the NBC drama series This Is Us in 2016. Lately, the versatile actress starred on the musical drama television series Empire.

Bathe is a talented actress and so far she starred in numerous movie and TV show. Her exact figure of net worth is yet to be revealed but according to multiple sources, she has her$ in six digits.

Her husband Sterling K. Brown has an impressive net worth of $4 million. Brown owns a luxurious 1,300 square foot house in Los Angeles, California.

The beautiful actress is happily married to Sterling K. Brown. Bathe and Brown tied the knot in June 2007. The couple shares two sons Andrew and Amaré.

Bathe and Brown were college friends. During their college, from friends, they became one another's love interest and eventually fell in love. The couple dated for years before getting married. They are an adorable Hollywood couple with their blissful conjugal life of over a decade.

Here is an interview of the beautiful couple talking about their first kiss.