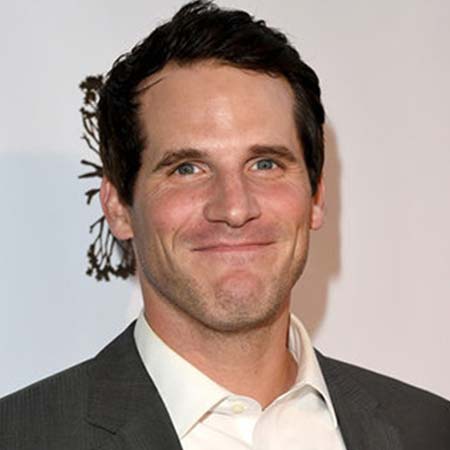 Ryan Gaul is an American actor and writer who is known for working in movies like Identity Thief and Father Figures. Further, he gained huge fame from the Short Film/Comedy How to Survive a Breakup as Nick.

Ryan Gaul was born on 29th October 1973, in Damariscotta, Maine, the U.S. to Mary and David R. Gaul. His birth sign is Scorpio. He belongs to a white ethnicity/race and holds an American nationality.

Gaul went to the Lincoln Academy of Newcastle, then joined the Stonehill College. Further, he used to work at W.B Mason before becoming an actor.

Ryan Gaul made his acting debut from the 2002 drama, Developing Sheldon as Sheldon. The following year, he appeared in an episode of American talk show, Jimmy Kimmel Live! as Ameritrade Spokesman.

He then appeared in several short dramas, and TV series such as Peanut Hunt, Team A.P.O.C.A.L.Y.P.S.E., Hot in Cleveland, Portrait STUdio, Hollywood Help, It's Always Sunny in Philadelphia, Our Two Minute Show, and Racquetball among others.

After that, Gaul got a recurring role Will, part of Marty's new pod in the 3rd season of American comedy television series, House of Lies alongside Genevieve Angelson, Eliza Coupe, Mekhi Phifer, and others. Further, he also has a recurring role in several TV series such as Bajillion Dollar Propertie$, Superstore, and The Last O.G.

Apart from acting, he is also involved as a member of  The Groundlings.

What is Ryan Gaul Relationship Status?

Ryan Gaul aged 44 is a very private person when it comes to sharing about his personal life. Even he has kept his Instagram platform private. As per the Wikipedia source, he is married to Christine Gaul, however, the detail on it is missing.

If we believe in the source he has been dating comedian, Rob Gleeson since 2014. Back in 2014 Rob tweeted and mentioned Ryan:

it’s a date! And by date I mean we’re dating now.

In the same way, back on 4th Jun 2017, Gaul replied to a tweet from his friend Mike Schaub asking him for marriage saying;

Because of continuous flirtatious tweets of Rayn with same-sex his fans always implies that he may be gay. However, there is no proof to confirm his sexuality.