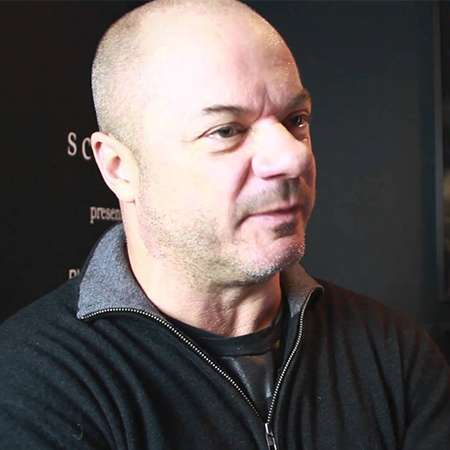 Russell Young is a British-American Pop artist famous for his silkscreens and paintings. He has also been involved in the music industry and has directed over 100 music videos. Some of his clients are Barack Obama, David Hockney, Elizabeth Taylor, Angelina Jolie, Brad Pitt, etc.

Russell Young was born on March 13, 1959, in York, England, UK. He was born to an unwed mother and was kept in foster care for the first month followed by a nunnery.

Young was adopted later adopted by Ken and Lesley Young when he was four months. He never liked school and used to bunk a lot.

Russell holds both British and American nationality and belongs to white ethnicity.

Russell Young first started his career working for a photographer, Christos Raftopoulos on the streets. He then worked at the live club shows R.E.M and the Smiths of Bauhaus.

Young’s career as a music video director and photographer began to rise when he move to Hollywood in 1992. Eventually, he returned to New York; rented a studio and began several series including Pig Portraits and Combine Paintings.

He shifted to California and continued his work. He even presented his Fame + Shame paintings in London in 2007. His paintings have been presented in the several places like London, Paris, Tokyo, Berlin, Detroit, New York, etc.

Russell Young married Finola Hughes in 1992. The couple has three children one of their own, and two of them are adopted. They have two sons and one daughter.

They welcomed their first child named Dylan Joseph Young on 9 November 2000. After a year, Russell and Hughes adopted a son Cash Justice Young born in 2005 and daughter Sadie Beatrice Young born on December 2007.

Russell’s children want to live in London and his fifteen years son Dylan wants to become a footballer.

His wife is an English actress-entrepreneur, author, television host as well as dancer.

Russell was suffered from Swine Flu and almost lost his life. He was in a coma for eight days, and the doctors even declared that he wouldn’t survive. Surprisingly, he defeated the death and was cured of the flu.

Russell Young earns lots of from his artist career and his net worth might be some million. His paintings are very popular among the various top level people and are easily sold at the auction. However, he is yet to reveal the exact figure.