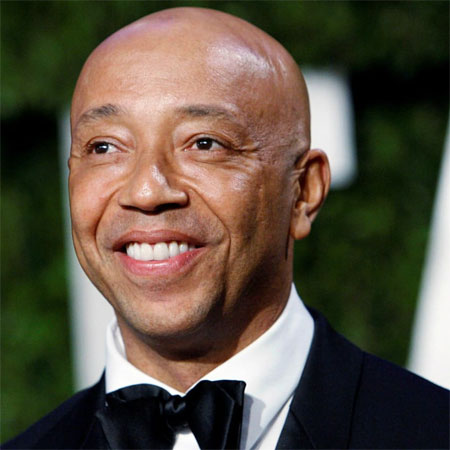 Russell Simmons is one of the biggest promoters of music & highly successful magnates of America. He is the co-founder of the ground-breaking hip-hop music label ‘Def Jam Recordings.’ He is the third wealthiest personality in hip-hop with a net worth of $340 million (2011).

Simmons is also the owner of the clothing lines, ‘American Cla s sics’ and ‘Argyleculture.’ He regularly contributes to the ‘Huffington Post’ and is a Goodwill Amba s sador for the UN Slavery Memorial. He is the recipient of the PETA Humanitarian Award in 2001.

In 1975, Simmons joined the City College of New York in Harlem. There he met a young DJ/Bboy, Kurt Walker who inspired him to participate in the hip-hop phenomenon.

Simmons later attended the Claremont Lincoln University. In 2014, he was honored an Honorary Doctorate Degree in Humane Letters for his work as chairman of the Foundation for Ethnic Understanding.

In 1985, Simmons appeared and co-produced the movie, ‘Krush Groove’, directed by Michael Schultz. He also owns a company named Rush Communications Inc. that includes over ten businesses and three non-profits.

Simmons alongside his partner, Stan Lathan has also created HBO's television hits such as Def Comedy Jam, Def Poetry Jam. They topped the music charts with the hit releases like ‘Raising Hell’ and ‘Licensed to Ill.’

In 1988, Simmons worked with more new talents. His works made the ‘Def Jam’ label one of the most successful hip-hop labels of the time. During the year, Rick Rubin left the company.

Simmons founded ‘Phat Farm’ in 1992. It was a line of clothing for men that catered the needs of contemporary demands. The label also launched a children’s clothing line called ‘Baby Phat.’

In 1996, Simmons produced the comedy film, ‘The Nutty Professor,’ starring Eddie Murphy. The movie was a blockbuster hit and earned positive reviews from the critics.

Later in the year 1999, Simmons began to work on several projects for his Rush Communications company. The company ventured into film production, sportswear, and advertising as well.

In 2002, Simmons produced the HBO TV series, ‘Def Poetry’; a featured performances by well-known poets. The show also gave a platform to young talents in the field of poetry.

In 2011, Simmons published his book titled, ‘Super Rich: A Guide to Having It All.’ The book was written as a guide to achieve much abundance and wealth. The book is based on a blend of spiritual wisdom and street-smartness.

Russell Simmons had many relationships in the past. He was in a relationship with Kimora Lee. The couple first met in New York Fashion Week.

During the time, Kimora was only 17 years, and Simmons was 35 years. They began dating and were in a relationship for several years.

Simmons got married Kimora Lee in 1998 at the Saint Barthélemy Island, located in France. They have two daughters, Aoki Lee Simmons and Ming Lee Simmons.

However, the couple separated in March 2006. Lee filed for divorce in 2008. Their divorce finalized in January 2009. They cited “irreconcilable differences” in their court filings. They continued to work together on the ‘Baby Phat’ and ‘Phat Farm’ clothing lines after the divorce.

Kimora got full custody of their daughters. According to some reports, the former couple had an agreement that Simmons would pay $40,000 per month as a child support until each daughter reaches 19-and-a-half years old.

Simmons started dating a German model, Hana Nitsche in 2012. They separated after a year of their relationship.

In November 2017, former model Keri Claussen Khalighi accused Simmons of sexual a s sault in 1991. At that time, Simmons was 34, and Khalighi was only 17 years old.

Most recently, Khalighi revealed in a televised interview on Megyn Kelly TODAY that Simmons apologized her in private. She also explained how Simmons’ recent statement refusing the claims had affected her personally.

On 30th November 30, 2017, an American screenwriter, Jenny Lumet claimed Simmons had a s saulted her back in 1991. In response, Simmons said he would step down from his positions with his businesses.

On the same day, HBO announced that they would be removing Simmons’ name from his stand-up comedy specials starting with the December 1 episode.

On December 13, 2017, Simmons was accused by a woman for sexual misconduct; including an alleged rape. The news was published by The Los Angeles Times and The New York Times.

However, in response to the allegation, he defends himself by stating, "never had a sexual encounter that was not consensual or lawful."

Russell Simmons co-founded the hip-hop label Def Jam Recordings and created the clothing fashion lines Argyleculture, Phat Farm and Tantris. He has an estimated net worth of approximately $350 million.

In 1983, Simmons and Rick Rubin started Def Jam. Rick sold his share of the company for $120 million to Universal Music Group in 1996.

Simmons’s movie ‘The Nutty Professor’ was made with the budget of $54 million and was able to acc u mulate a tremendous amount of $274 at the box-office.