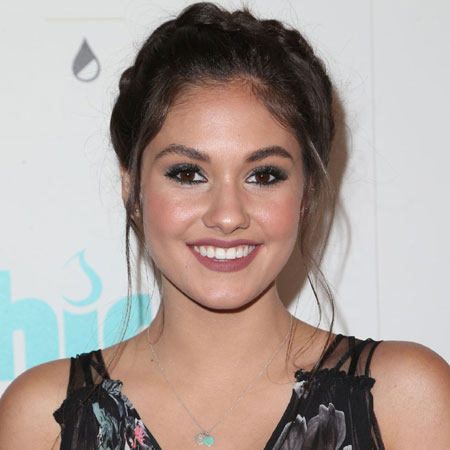 Ronni Hawk is a young and talented American actress, well known for portraying Rachel Diaz in the US-American youth - Sitcom, Stuck in the Middle.

As of 2018, she is working on Netflix's TV Series, On My Block. Before pursuing a career in acting, she built her career as a model and appeared in several commercials.

Hawk grew up learning performing arts. At the age of five, Hawk started studying classical ballet, jazz as well as modern at the Boca Ballet Theatre. She has also participated in various performances. Moreover, She went to Bak Middle School of the Arts in Palm Beach, Florida. She also took acting classes in Florida.

At the young age of 5, Ronni Hawk started learning dance in a theater. Hawk began her career in modeling when she was just 10 years old. She made her appearance as a child model in commercials and advertisements when she was just twelve.

In her early career, she did modeling for several commercials like Bank of America, Kohl's Bealls, AT & T, and Target. She made up her mind to pursue a career as an actress after she met two acting teachers in Los Angeles.

Hawk along with her family moved to Los Angeles to pursue her career in acting. She later, appeared on several stage shows and nutcrackers when she was at Bak School of the Arts.

Hawk started her professional career as Leah in 2014 in an episode of Playing Hooky. Two years later, she portrayed the lead character, the oldest of seven children, Rachel Diaz in Disney CHannel's comedy TV series, Stick in the Middle.

Hawk In On My Block

She was a s sociated in the series from 2016 to 2018 where she shared the screen with Issak Presley, Kayla Maisonet, Cerina Vincent, and Joe Nieves. Her performance was highly appreciated by both fans and audiences.

As of 2018, she is working as a friend of Ruby's family, Olivia in Netflix's coming-of-age TV series, On My Block. The series starred Jason Genao, Brett Gray, Diego Tinoco, and Sierra Capri among others.

Ronni Hawk is one of the most promising actresses in Hollywood. She is still very young and has yet to make a mark in the industry. Hawk has acted in numerous television series as well as movies from which she must have earned a good salary.

However, her current net worth has not been disclosed yet but as per several online sources, she has an accumulated net worth of $400 thousand.

According to some sources, Hawk earns a salary of $20k per episode from Netflix's TV series, On My Block. Furthermore, she has many upcoming projects from which we can assume to see a rise in her net worth in the coming future

Who is Ronni dating?

The young actress, Ronni Hawk has maintained a low profile about her relationship status. However, there was a rumor that her boyfriend is Aaron Reiser after she posted a video of herself holding hands with him.

''I love getting to travel around with you.''

Reiser made it clear through his Instagram after replying to the comments of his fans and explaining that Hawk is just his best friend. The talented and young American actress, Hawk has a hand full of work. She is hardworking and ambitious which might be the reason for giving first priority to her work rather than involving in any serious relationships.

As of 2022, Hawk might be possibly single. Also, she is not married as she might not be ready to tie the knot or has not found the lucky one who would be her husband or spouse.

Besides, Hawk is crazy about pets and has two dogs, Chanel & Paley, and also a cat named Lila. She loves to donate her time to animal rescue shelters.

Check out the interview with Rooni Hawk: