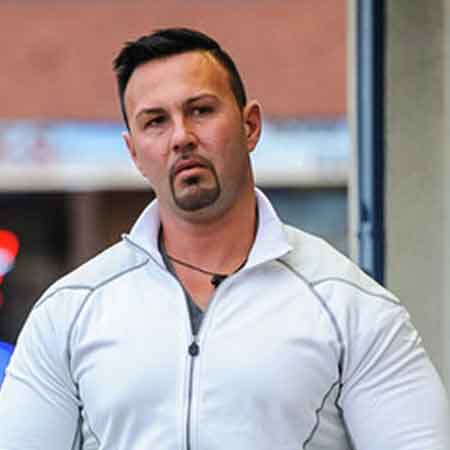 The American reality star, Roger Mathews is a union truck driver who rose to fame following his romantic relationship with Jersey Shore star Jenni Farley aka JWoww. The couple married in October 2015 and shares two children.

Roger Mathews was born on June 1, 1975, in Cherryfield, Maine. His birth sign is Gemini which defines his personality as expressive and quick-witted with a tendency to suddenly get serious, thoughtful and restless.

Mathews first worked as a truck driver for Hazmat Tankers to support his family. In 2011, he participated in  MTV reality series, Jersey Shore which helped him to gain media attention.  His relationship with Jersey Shore star, Jenni Farley who active in the show since 2009 gave him the new height of popularity.

The duo last appeared together in season 6 of Jersy Shore and featured in Marriage Boot Camp after their marriage.

Roger Mathew is active in the TV world since 2011 and he has appeared in a number of reality shows.  Some of the regular cast of Jersey Shore made $150k per episode. So, Mathew might earn the same amount. Considering his career growth his estimated net worth is in six digit figure. On the other hand, his wife has an estimated net worth of $3 million.

Roger Mathews is happily married to his longtime reality star girlfriend, Jenni Farley aka JWoww. The duo started dating in 2009 but made their relationship official in 2011 after appearing together in MTV show, Jersey Shore.

Mathew proposed JWoow while skydiving with a beautiful diamond ring. The couple exchanged a vow in October 2015 at an intimate yet lavishing ceremony.

The duo is proud parents of two children, they first welcomed their baby girl, Meilani Mathew on July 13, 2014, before their marriage. In 2016, the pair was blessed with a son,  Greyson Valor.

CAPTION: Roger Mathews with his wife and children. SOURCE: Eonline

Mathews is fascinated about tattoos since a young age and at the age of 17, he got inked for the first time and to date, he has more than 150 tattoos on his body.

He has a huge number of fan following on Instagram of 1.5+ followers where he often posts pictures of his wife and children.