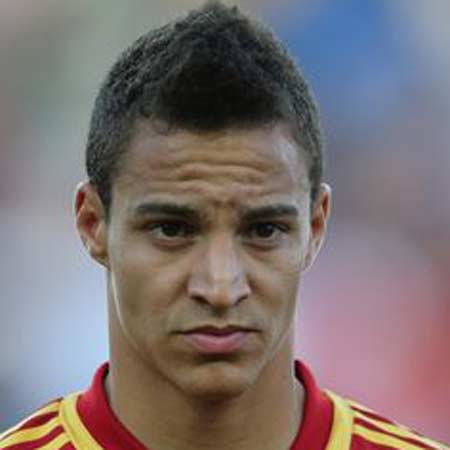 Born and Raised in Brazil, Rodrigo is one of the famous strikers playing for the Spanish professional football club, Valencia CF and Spain national team. The winger is playing for the team since 2014 after being transferred on a season loan and signed an official contract in 2015. Internationally, he represented Spain national team in the under-19, and under-21 levels. He also competed in 2011 FIFA U-20 World Cup where he scored three goals. The player is selected in the final man-squad for the 2018 World Cup.

Rodrigo was born Rodrigo Moreno Machado on 6th March 1991 in Rio de Janeiro under the birth sign Pisces. He holds both Brazilian and Spanish nationalities, and as far as his ethnicity is concerned, he is Hispanic.

His parents, Adalberto Machado and Andreia Moreno Machado raised him with his sister, Mariana Machado in Brazil.

Rodrigo moved to Spain in his early teens to pursue his career in football. He settled in Galicia and started playing for Celta de Vigo. At the age of 18, he moved to Real Madrid for his skill development. Soon after, he played as a senior with Real Madrid C-team. His good performance helped him to get promoted to Real Madrid Castilla in Segunda Division B.

On 29th November 2009, Rodrigo made his debut for the team in the 4-3 win match against UD Lanzarote.

Rodrigo signed a five-year contract with Benfica on 31st July 2010 for €6 million ($7.06 million). During the next two seasons, Real Madrid had an option to re-buy him for €12 million ($14.12 million), but the buyback clause was canceled after Fabio Coentrao’s transfer to the Spanish club.

In 2010, Rodrigo was transferred to Bolton Wanderers of the Premier League on a season-long loan. On 21st September 2010, he made his debut for the club in a League Cup in 0-1 loss.

The footballer returned to his old club, Benfica in season 2011-12. At the end of the season, he scored 16 goals appearing in 38 matches. The club sold all his economic rights to Meriton Captial Limited owned by Peter Lim for €30 million ($35.30 million) with an additional €10 million ($11.77 million) bonuses.

Rodrigo scored his first goal in the league cup in a 2-0 win over Rio Ave F.C and subsequently was voted Man of the match after his team won the competition fifth time in seven years. At the end of 2013-2014 season, he appeared in 120 matches scoring 45 goals.

Rodrigo transferred to Spanish football club Valencia CF on 23rd July 2014 on a one-season loan deal. He made his debut for the club on 23rd August 2014 in a 1-1 draw against Sevilla. Later, he scored his debut goal for the team in a 3-0 victory over Getafe CF.

Spanish winger, Rodrigo, represented the youth national team in the under-19 in the 2010 UEFA European Championship. Later, he competed in the 2011 FIFA U-20 World Cup, helping the national team to the quarter-finals scoring three goals.

On 1st September 2011, Rodrigo made his debut for the Spanish under-21 side scoring hat-trick in the 2013 European Championship qualifiers. He was then included in Spain’s squad at the 2012 Summer Olympics.

Rodrigo, the renowned striker, has collected a decent sum of money. As of 2018, his net worth can be assumed to be over $5 million. His current market value is €22.50 million ($26.47 million). He also makes an impressive amount from his endorsement deal with Nike.

As per some online sources, a Valencia’s player averagely makes a salary of $3.16 million per year.

Rodrigo is yet to get married. Despite being a popular footballer, he prefers to keep his relationship and dating life low key. With the limited information he has shared about his love life, it can be assumed that he might be possibly single.

The striker is the cousin of Thiago Alcantara and Rafinha.

Besides, he is an animal lover and supports to protect the right of the animals.

Here is the video which shows Rodrigo's skills and goals: