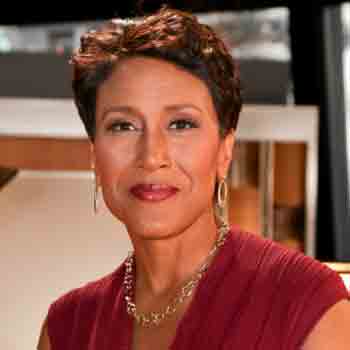 A very talented and versatile journalist, author and athlete, Robin Rene Roberts is popularly known in American television broadcasting arena as Robin Roberts. She is the anchor of ABC’s morning show Good Morning America since 2005. Prior to working at ABC Network, she worked as a sportscaster in ESPN for 15 years from 1990 till 2005. Roberts has been active in the field of journalism since 1983 till present.

Robin Roberts was born in the year 1960 November 23 at Tuskegee, Alabama, the United States from parents Lawrence E. Roberts, who was Lucimarian Tolliver and Colonel. She was raised up in Pa s s Christian, Mississipi playing basketball, tennis and other sports.

She is the youngest amongst her four other sisters named Sally Ann, Lawrence, Junior (nicknamed Butch) and Dorothy. She had attended Pa s s Christian High School and graduated c u m laude in 1983 with a degree in communication from Southeastern Louisiana University in Hammond, Louisiana.

While at her school and university, she had played basketball from women’s basketball team ending her career as the school's third all-time leading scorer (1446 points) and rebounder (1,034).

She has been one of the three Lady Lions who scored 1000 career points and 1000 career rebounds. She has averaged a career-high 15.2 points per game and retired from her number 21 jersey as Southeastern Louisiana University hosted a ceremony in 2011 February 5.

Robin Roberts began her career since 1983 as a sportscaster and reporter for WDAM-TV in Hattiesburg, Mississippi. After a year, she moved to WLOX-TV in Biloxi, Mississippi. Since 1986, she joined at WSMV-TV in Nashville, Tennessee and moved to WAGA-TV in Atlanta, Georgia in 1988. Meanwhile, she also worked as a radio host for V-103.

Robin joined at ESPN Network in 1990 February and dedicated her 15 years for the Network as a sportscaster. She became well known on Sportscenter for her catchphrase “Go on with your bad self!” Since 2005, she has been working for ABC News, especially as a feature reporter.

Robin Roberts is a very talented journalist who has been the inspiration to other new journalists. Due to her professional Excellency, she has been awarded the Daughters of the American Revolution (DAR) Television Award of Merit in 1990, two Emmy Awards for Sportscasting work while working at ESPN, Excellence in Sports Journalism Award from Northeastern University Centre for Study of Sport in Society in 1993. She has also been conducted to the Women’s Institute on Sport and Education’s Hal of Fame in 1994.

Robin Roberts is an American news anchor who has a net worth of $35 million.

Robin Roberts is a beautiful lady with good height, weight and body shape. She is practicing Christian. Talking about her sexuality, Robin Roberts on 2013 December 29, publicized about her gay sexuality posting a photo on Facebook with a caption where she stated Amber Laign as her longtime girlfriend and partner.

It was well known to her colleague and a few others that she is attracted to same-sex people but it was the first time when she openly talked about her sexuality. Robin Roberts has never been married and does not have a husband as she is attracted to the same sex partner. Robin and Amber began dating and are in love affair since 2003.

Talking more on her, Robin Roberts was diagnosed with the early symptoms of breast cancer in 2007. She went through the surgery on August 3 and by January 2008, she had gone through 8 rounds of chemotherapy treatments followed by 61/2 weeks of radiation treatment.

As in a similar situation, in 2012, she was diagnosed with myelodysplastic syndrome (MDS), which is a disease related to bone marrow. After she went public with her illness, there has been a long queue of bone marrow donors to Roberts s for the case, there must be a match.

She went through the bone marrow transplant and went home in October 2012. She has been back to the ABC’s Good Morning America in 2013 February 20. As for the reason that she had helped to raise the awareness and need of the donors towards such a rare disease, she was awarded Peabody Award in 2013 and also Arthur Ashe Courage Award by ESPN at 2013 ESPYs.

Robin can be followed in her social accounts Facebook and Twitter. Her fans can get more information on her going through different internet websites which locates her pictures, videos, and bio including in Wikipedia, IMDb, etc