Rob McElhenney is a popular American actor, writer, and producer, best known for his role Ronald "Mac" McDonald in the series It's Always Sunny in Philadelphia. Some of his notable work credits include The Devil's Own, Law & Order, and Fargo. Moreover, he is also popular as the husband of Kaitlin Olson, with whom he also shared the screen in It's Always Sunny in Philadelphia.

Rob McElhenney was born as Robert Dale McElhenney on April 14, 1977, in Philadelphia, Pennsylvania, the U.S.A. She is an Aries. He is an American by nationality, belongs to the mixed ethnicity, and follows Roman Catholic religion.

Rob was born to father Robert McElhenney and the mother, Helena McElhenney. His parents divorced after his mom came out as gay when he was only eight years old.

He has a sister named Katie McElhenney. They were raised by a single father but, their parents were close even after the separation. McElhenney also has two half-sisters from his dad's another wedding.

The actor went to Saint Joseph's Preparatory School, and he moved to New York City after his graduation. Additionally, he attended some courses at Fordham University and lived there for a short period along with his friends, however, was not enrolled there.

American actor Rob McElhenney began his career as an actor in the movie The Devil's Own in 1997. In the same year, he appeared in an episode of the television series Law & Order.

In 1998, the handsome hunk again worked in the film A Civil Action. Similarly, Rob also featured in the films like Wonder Boys, Latter Days, and  The Tollbooth.

Moreover, in 2005, the prominent figure got the role of Ronald "Mac" McDonald in the TV series It's Always Sunny in Philadelphia and gained ma s sive popularity. Later, McElhenney served in some other TV series such as Lost, How to Be a Gentleman, Fargo, The Cool Kids, and many more.

Rob's recent work credit include Spikeface and Game of Thrones. In the popular series Game of Thrones, he appeared in an episode Winterfell as a cameo where he portrayed Ironborn soldier.

Rob and his wife Olson purchased a house worthing $2.1 million along with the features of the brand new 4-bedroom gated home. Later, he sold the mansion for $2.5 million in November 2018. Moreover, the couple bought Skinner's bar at 226 Market Street and renamed it as Mac's Tavern. 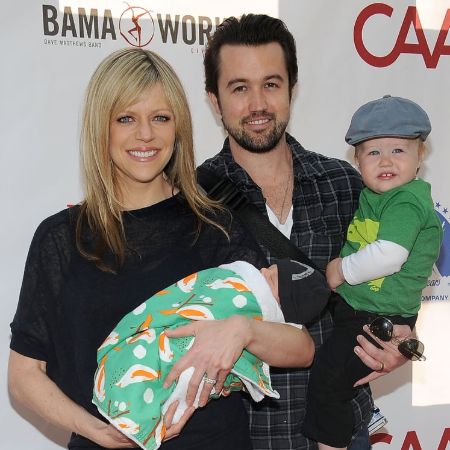