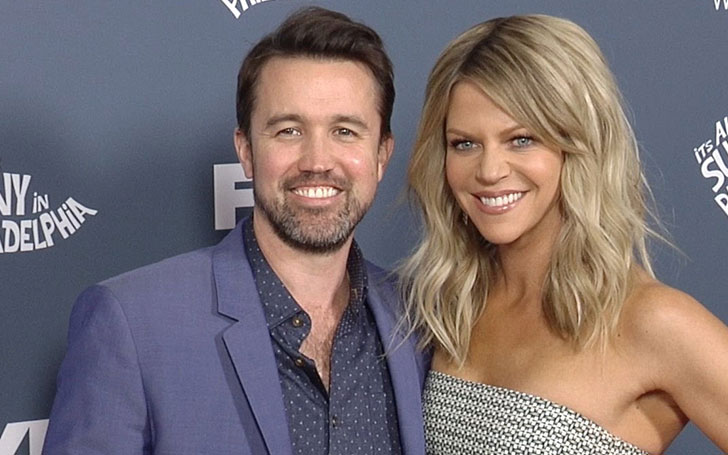 The 43-year-old actress is famous among her fans as an outspoken star, however, her personal relationships and family life are something she loves to keep low key. But, we've got everything you want to know about her personal life. Stay with us till the end!

Actress Kaitlin Olson was a determined actress who was focused on her career rather than involving in relationships. Olson was almost not involved in any relationship until she got into her 30s before she fell in love with her Always Sunny in Philadelphia co-star Rob McElhenney.

The couple fell in love during the second season of the show but kept their relationship secret from their fans for a long time. After two years of courtship, they walked down the aisle on 27th September 2008, in Malibu, California.

Olson and McElhenney exchanged their vows in a private wedding attended by their family members and friends. Fellow stars Danny DeVito, Emily Deschanel, and Fred Savage also attended their marriage.

Meanwhile, as per some sources, Olson was dating a man before she started dating McElhenney. Moreover, Olson's relationship with the anonymous guy made them wait for a while to take their relationship to the public. However, the couple hasn't addressed such kind of news until the date.

It's been over a decade since Kaitlin Olson and Rob McElhenney got married. The couple has experienced the parenthood twice in this eleven-year-long journey as husband and wife.

Nearly two years after their marriage, they gave birth to their first child, a son Axel Lee on September 1, 2010. Olson and her husband McElhenney were at a baseball match between Philadelphia Phillies and Angeles Dodgers when she went into labor. Olson later said,

I went into labor at the Phillies/Dodgers game on Tuesday night. As soon as Ryan Howard hit a three-run home run, we felt comfortable leaving to go have our baby. We love him like crazy, even though he made us miss the second half of the game.

They later welcomed their baby at their California home as planned. On April 5, 2012, they welcomed another addition to their family, their second son, Leo Grey McElhenney.

The couple rarely makes their public appearance with their children. Moreover, the parents don't share their children's photos on their social media. Olson often shares her workspace and her time with her friends and costars on her social media while same goes with her husband, McElhenney.