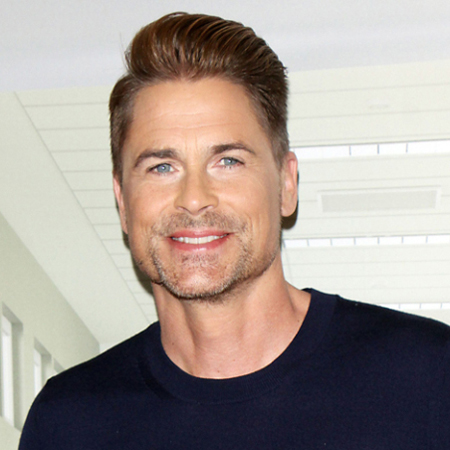 The Screen Actors Guild Award-winning actor, Rob Lowe is known for his roles in the movies like The Outsiders, Oxford Blues, St. Elmo's Fire, and About Last Night….  During the 80’s, he was known as one of the most prominent actors.

Lowe was enlisted in ‘50 Most Beautiful People in the World’ by the People Magazine in 2000. He married a makeup artist Sheryl Berkoff and has two sons, John Owen Lowe and Matthew Edward Lowe with her

Lowe is a son of Davis Lowe, a trial lawyer and Barbara Lynn, a schoolteacher, and native of Connecticut. His parents divorced when he was a child after which his mother raised him and his brother Chad Lowe in California.

Rob Lowe was nineteen years old when he stepped into the film industry. He worked as Sam Alden in the 1983 television movie ‘Thursday’s Child,’ won him his first Golden Globe nomination. The same year, Lowe played the lead role in an American drama film, 'The Outsiders'.

In 1985, Lowe was cast in an American coming-of-age film, ‘St. Elmo's Fire’, along with Demi Moore, Ally Sheedy and so on. He then starred opposite of Demi Moore in ‘About Last Night,’ directed by Edward Zwick.

In 1980s Lowe became youth sensation and known as the ‘teenage heartthrob.’ He succeeded to earn his second Golden Globe nomination for his role as ‘Rory,’ a mentally disabled person in ‘Square Dance.’

In the 1990s, he appeared in a number of movies including ‘Wayne’s World,’ ‘Austin Powers: The Spy Who Shagged Me,’ ‘Contact,’ and ‘The Specials.’

In 2004, Lowe appeared in American two-part television mini-series, ‘Salem’s Lot,’ an adaptation of Stephen King’s novel of the same title.

He received critical acclamation and international fame with the 2005 American comedy-drama film, ‘Thank you for Smoking,’ as ‘Jeff Megall,’ a Hollywood super movie agent.

In 2009, Lowe appeared in a comedy film ‘The Invention of Lying’ as Brad Kessler directed by Ricky Gervais, and also cast as a lead in the movie ‘Too Late To Say Goodbye.’

In 2010, he acted in the biographical series, ‘Brat Pack: Where Are They Now.’ He also made an appearance on the ‘The Tonight Show with Conan O'Brien.’

Lowe currently works as Dr. Ethan Willis on Code Black. He has also been working as a voice-over artist on The Lion Guard since 2016.

Rob Lowe is married to a makeup artist Sheryl Berkoff. The duo first met at a blind date, set by their mutual friend, in 1983. However, they didn’t want to be in a relationship at the time.

After few dates, they stopped seeing each other until 1990 when they again met on the sets of Bad Influence, a film by Lowe.

The couple continued dating for around a year before they exchanged vows on 22nd July 1991. Since then, they are living a blissful married life with two sons, Edward Matthew Lowe, born in 1993 and John Owen Lowe, born in 1995.

In 1988, Rob Lowe and Jan Parsons met at a nightclub in Georgia, at the time Parsons was sixteen years old. However, Parsons told Lowe that she was 21 and they ended up sleeping together in Lowe’s hotel room.

Their moment was recorded on tape and sold on the black market for somewhere between $500 and $1,000.

Lowe proposed 17-year old Melissa Gilbert in 1986. A year later, the couple broke up after Gilbert was pregnant with Lowe's child. But she had a miscarriage and told she had lost her baby and relationship with Rob, and it hurt like hell.

In 1983, Lowe had an affair with German actress and former supermodel, Nasta s sja Kinski known as the “Angelina Jolie of her time” for her lips.

Lowe had a brief romance with a 22-year-old receptionist, Tara Siebert. They first met at a club in 1986.

Lowe was also linked with Princess Stéphanie of Monaco when he visited France to promote his movie, About Last Night. He met princess through the help of his mutual friend which spread the rumors about their romance.

She is the youngest child of American actress Princess Grace of Monaco and Rainier III, Prince of Monaco.

Rob Lowe was in a relationship with American actress Winona Ryder, one of the most popular actresses in 1990s. They first met on the sets of the film Square Dance, during the time he was 21 and Ryder was 13.

American actress, author, as well as an activist, Marlee Matlin is known for winning the Oscar for Best Actress in a Leading Role for Children of a Lesser God (1986).

Lowe and Marlee Matlin dated for a year until 1988.

Rob Lowe and American Politician\Public Servant, Fawn Hall, was in a relationship in 1988. Hall’s mother, Wilma Hall, was the secretary of Robert McFarlane.

Lowe had an encounter with Janice Dickinson, a model, photographer, author, as well as an agent. She claimed to have a three-way with Lowe and one of his friends in the ’80s.

Lowe was in a romantic relationship with dancer, teacher, and choreographer Laura Dunlop. The duo dated from 1989 to 1990. As per some sources, they were spotted together in several places.

Rob Lowe is considered as one of the versatile and successful actors who has worked on more than 50 movies. His estimated net worth is $30 million which he acc u mulated from his acting career and brand endorsements.

Lowe launched a men's skincare product line, Profile in 2015 which features five anti-aging products. Besides this, it consists of a cleanser, a shave gel, an aftershave serum, a moisturizer, and an eye serum priced between $24.50 to $59.50.

He also served as the founder of the Homeowner's Defense Fund, a non-profit organization dedicated to local control of land-use planning.

From 1999 to 2006, Lowe was part of NBC popular political drama series, The West Wing where he received $75,000 per episodes, all together appearing in 80 episodes. The show garnered 16 million viewers, and TV Guide listed the show in number 13 at ‘The 50 Greatest Dramas of All Time’.

In 2005, he appeared in miniseries, Beach Girls which received the highest ratings in the history of Lifetime Network.

In 1985 his movie, St. Elmo's Fire earned $37.8 million at the box office, considered as the biggest hit of that time.

Similarly, his other movies also did a satisfactory job at the box office like The Outsiders ($33.7 million), About Last Night ($44 million), Wayne's World ($183.1 million) and many other.

In 2009, Lowe sold his Montecito, California house for $7.6 million. Similarly, he sold his Santa Barbara mansion for $5.9 million which covers 2082 square feet area and consists of 3 bedrooms and 3 bathrooms.

Rob Lowe is also pa s sionate about cars and has a long list of expensive cars including, Rolls Royce, BMW, Audi and many more.

Rob Lowe was enlisted in ‘50 Most Beautiful People in the World’ by the People Magazine in 2000. Consecutively, in 2001 and 2002, Lowe won the Screen Actors Guild Award for The West Wing in the category of ‘Outstanding Performance by an Ensemble in a Drama Series.’