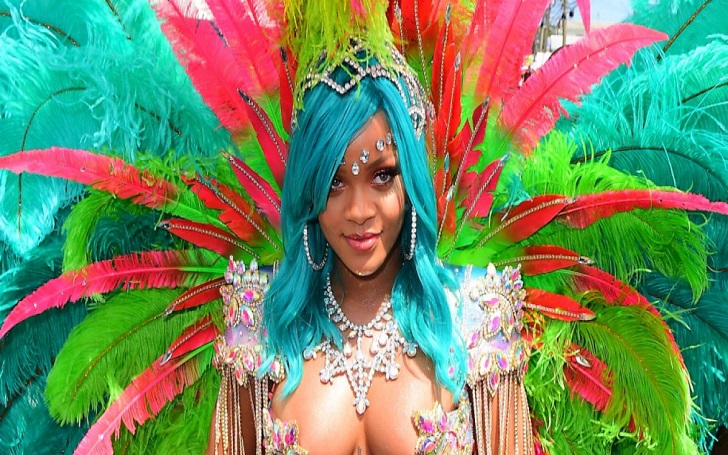 When it comes to jaw-dropping style, no one can even dream of beating RiRi.

All the SNS almost collapsed under the reaction to Rihanna's risqué carnival costume on Monday as the singer attended the Crop Over festival in her hometown, Barbados.

The singer showed up with blue hair wearing a jewel-encrusted bikini, pearlized d.bleu.dazzled tights, and matching thigh-high gladiators and this outfit might just her best one yet.

The 29-year-old shared a photo on Instagram flaunting her beautiful outfit. It’s a bit surprising but it only took just one day for the costume’s designer, Lauren Austin to make the incredible outfit.

Designer Austin, who has been designing amazing costumes for Crop Over for seven years, sent Rihanna a number of sketches – and obviously, the Diamond singer chose the best and the wildest one.

Austin told Vogue, “I love how daring Rihanna is — her style is edgy and she isn’t afraid to wear whatever she wants when she wants. The costumes are all made in my studio located inside Christ Church in Barbados. Crop Over used to be celebrated with people wearing simple T-shirts.”

She added, “Over the years, however, designers started getting creative. Today it’s very important to dress up in full costume to really and truly feel the Crop Over vibe. It’s exhilarating, free, and radiant.”

Rihanna is the baddest bitch on this planet. Blue wig, thick, thin, it don't matter. She's the one and that's not up for debate. pic.twitter.com/3K9E9K1H6o

The fans went crazy seeing their favorite being front and center this year at the festival. And Chris Brown, in particular, had no problem commenting on his ex-girlfriend's photo with a special pair of emojis.

Many of her fans were upset about this, telling Chris to "keep his negative energy away" from Rihanna and recalling his assault on the singer in 2009 when the pair were dating.

This isn't the first time that Chris has commented on one of Rihanna's pics, and seeing how incredible she’s been looking lately, it surely won't be the last. But Rihanna's living her best life, so she's probably unaffected by it anyway.