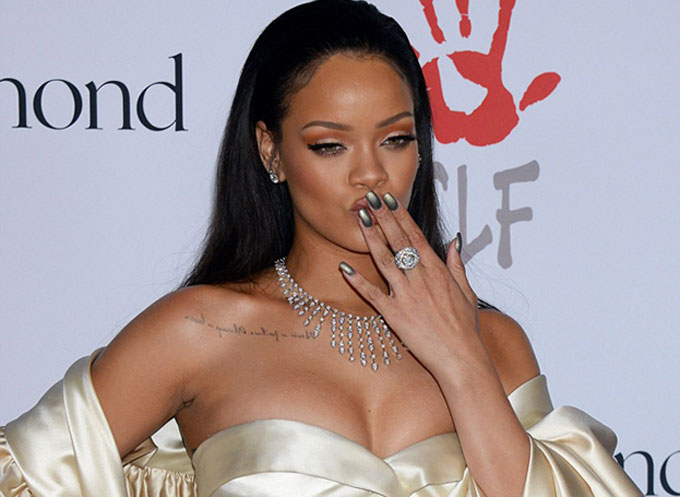 Rihanna's hot appearance in dark scarlet gown has attracted all eyes on her at the London premiere of her new film 'Valerian' last night(24 July).

Rihanna's staggering cleavage from the low cut gown kept people stuck at her where she struggled to manage her ample assets as she stepped braless at the premiere.

Speaking on the red carpet, Rihanna shared her experience working with the team; said she celebrated her role as a dancing, shape-shifting alien Bubble in the Luc Besso's sci-fiction epic starring alongside Cara, Clive Owen, and Dane Dehaan,

Afterward, the gorgeous singer and actress appeared in a little more comfortable outfit as she headed to an after-party at London's near St. Martins Lane Hotel.

The Bajan singer looked exceptional in a silver satin dress where she teamed her outfit with a stylish silver bag, jacket and silver strappy sandals, however, she again chose not to wear any inner support for her breasts.

The 29-year-old singer and actress has made her appearance in a number of films and is pretty hopeful with her new film Valerian and the City of a Thousand Planets.