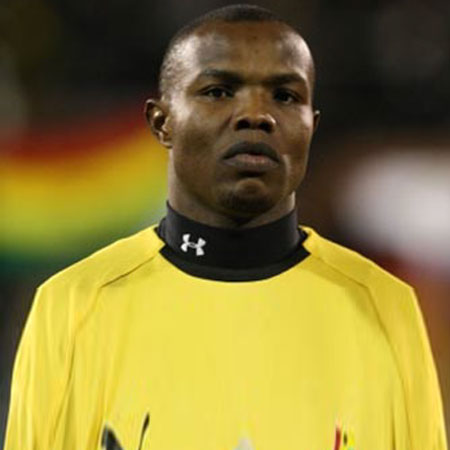 Richard Kingson, full name Richard Paul Franck Kingson also known as Faruk Gursoy is a professional Ghanaian footballer who is playing for the Current Team of TFF First League club Balikesirspor and the National team of Nation Ghana as well. He was born in 13 June 1978 in Accra, Ghana. He is professionally a Goalkeeper. He also played for different Nation’s clubs. He was the Vice-captain for the Ghana national Football Team. He holds Passportsof Ghana as well as Turkey.

Kingson left Accra in 1996 to chase a career in Turkey, where he played for six different clubs and became the citizen with a name Faruk Gursoy. Galatasaray S.K. was his first club in Turkey .He was signed to Galatasaray S.K. but did not play a single game. On 2004-05 he again played for Galatasaray S.K again, but he was suspended from football for six month because of failing doping test.  After  three-month period on a loan to Hammarby FC, he drew attention from other clubs from Europe. On August 2007, he made his first appearance for Birmingham in a League Cup third round tie against Hereford United.  He played for different clubs after Birmingham such as Wigan Athletic (2008-2010), Blackpool (2010-2011), Doxa Katokopias in 2013. And currently playing for Balikesirspor.

Kingson sibling is his brother Laryea kingson, who also was a member  Ghana National Football team. Kingson’s Spouse is Adelaide Tawiah. They got married in Ghana. A controversy arose when Adelaide during a prayer confessed that she had used spirits to destroy Kingson’s career and rendered him powerless.

Kingson is 1.83m (6 ft) tall in Height and and has 87 kg body Weight. His Pictures is all available in the internet.