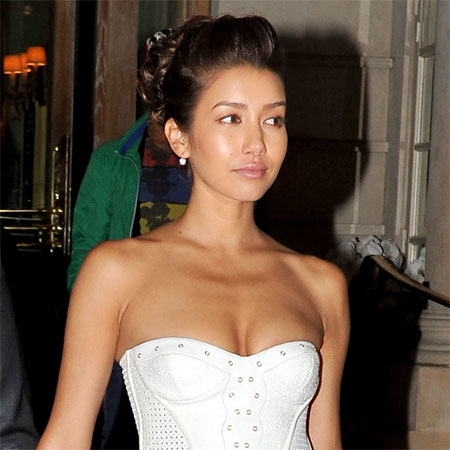 Renee Puente is an American actress and model, well recognized after she got married to Matthew Morrison, who is also an actor who gained worldwide recognition following his smashing performance in multiple Broadway and Off-Broadway productions.

Renee Puente was born on 5th October 1984 in Hawaii. She was raised up in her hometown Hawaii along with her family. Renee Puente is white in ethnicity and holds an American nationality.

Renee Puente has made her appearance in less number of movies, but still, she is famous enough as a celebrity. In the year 2011, Puente made a guest appearance in an American comedy series, The Exes, alongside Donald Falson, Wayne Knight, David Alan, Kristen Johnston, and Kelly Stables.

Additionally, Renee has also worked in a fiction movie, Divergent in 2014 with a small role alongside the stars, Shailene Woodley, Miles Teller, Theo James, Zoe Kravitz, Ansel Elgort, Kate Winslet and others.

Besides, Puente was also in a girl group, as they got an offer from Interscope Record for a recording contract, also appeared as a model too.

Renee Puente's Net Worth And Salary

Though Puente has made her appearance in a few movies, she might have a good amount of net worth whereas, Puente's husband Morrison has a total net worth of $ 10 million. They are living a good celebrity life together.

In the year 2007, the actor played the role in the super hit movie Music and Lyrics which became the quite hit at the box office grossing over $145 million worldwide.

Renee Puente is in a relationship. She has been dating an American dancer, singer, and actor, Matthew Morrison since 2011. After two years of dating, Renee and Matthew got engaged on 28th June 2013.

“An incredible night of LOVE @ejaf ball,” Morrison Tweeted in June of the engagement. “I’m going to marry my best friend! Happy day for me and @Renee_Puente.”

The following year on 18th October, the couple became husband and wife officially, after they got married in front of fifty guests including his family and friends.

The two were married in an intimate celebration in front of 50 family and friends on a private estate in Kihei on the island of Maui, Hawaii, the actor’s rep confirms exclusively to PEOPLE.

After three years of their marriage, the couple announced about their first baby on 17th May 2017. A few months later, on 23rd October, the couple became father and mother, with their first child, a son named Revel James Makai Morrison. The couple uploaded a photo of their son.

The power couple has been together for nearly a half decade and still sharing the wonderful married life.