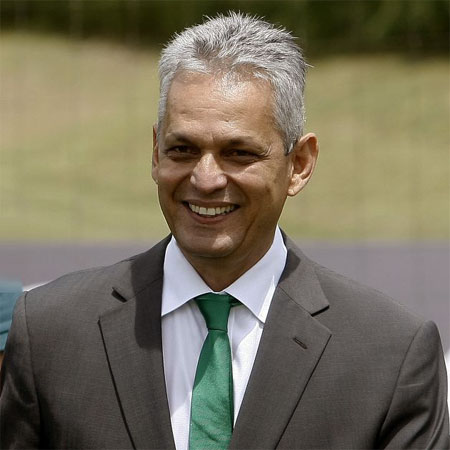 Reinaldo Rueda Rivera is a football manager from Colombia who is currently managing Ecuadorian national team.

Reinaldo Rueda was born on 16th April, 1957 in Cali, Colombia, under the birth sign Aries. Rueda holds a degree in physical degree from University of Cologne, Germany. Ruedo has also served as a University professor and has taught many courses in the Colombian Nation Coaches School.

He has attended FIFA and UEFA updating courses in Europe as well.He was interested in football from his very early age.So basically what he is today he infact his hard work and dedicatoin in the game field .

During his playing career Rueda played for clubs in amateur and many college competitions. Previously he coached Independiente, Medellin, Deportivo Caliand Cortulua all in Colombia. Rueda has coached Colombian U-17,U-20,U-23 and also senior teams.

He led the Colombian U-21 team to the final qualifying rounds in the Toulon Tournament held in France in 200 and 2001. Colombia won the Championship 3-1 against Portugal on 3rd June 200. However, in 2001 they finished second. Rueda got the U-2o team to the FIFA U-20 ,U-20 World Cup and this appearance was after 10 years.

He could not help Qualify his nation Colombia in the 2006 World Cup but made a great play anyways. Rueda took to managing Honduran national team in January 2007. He helped Honduras qualify for the2010 FIFA World Cup.

Nonetheless, Honduras exited World Cup from the first stage. Rueda left his position as the coach on July 28, 2010, after three years of managing the team. Since then he has been a coach to the Ecuador national team.

Rueda’s romantic life is not known about but we hope to know more about his marriage and affairs detail n coming years. Rueda has a height of 1.78m and an accompanying proper weight with it. he is 57 years old. His current team to coach is Ecuador. He has been the manager of the nation since 2010.

He became professionally known during his managerial time at Colombia youth team. Ruedo finished third with Colombian U-20 team at the 2003 FIFA World Youth Championship. Besides he had led the Colombian U-17 team to a fourth place the same year (2003) in the U-17 World Cup.

He also helped Honduras finish 6th at CONMEBOL which otherwise Colombia finished near to the last. The glory years in his managing Colombian youth team can be pointed out as his career best. And these achievements led him to get noticed in the international football arena.