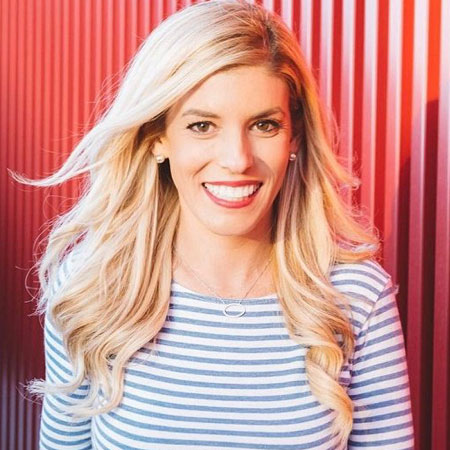 Rebecca Zamolo is a woman with multiple talents;  she is an actor, producer, writer, YouTuber, and also gymnast. A trainer at The Second City improv club, Rebecca has also done many commercials as well as comedy series on the web.

Rebecca Lynn Zamolo, better known as Becca, was born on 28th September 1982 in Martinez, California in the United States of America. She is the daughter of Paul and Cathy Zamolo.

American by nationality, Zamolo is White and doesn't belong to any other particular ethnicity. Her zodiac sign is Libra.

She grew up with her family and four siblings; Jennifer, Monica, Michael, and Lissa. Rebecca Zamolo graduated from the University of California with a degree in Communication and Sports Management.

Rebecca Zamolo had a keen interest in gymnastics from a very young age. She was already active as a gymnast when she was nine years old. She had won the Regional and National titles in gymnastics by then.

Rebecca Zamolo developed an interest in acting and entertainment when she was in college. She decided to take her acting when she moved to Los Angeles.

Zamolo started by doing comedy at The Second City. She performed with the Improv Troupe. In 2010, she featured on The Late Late Show with Craig Ferguson as a recurring actor. She was an audience favorite.

In the following years, Zamolo videos have gone viral on Huffington Post and other blogs. Rebecca has gained experience by working for brands like Funny or Die Yahoo and Blip. TV.

Rebecca Zamolo has also worked alongside famous actors like Matthew Morrison of Glee and Dean Norris of Breaking Bad. She has also worked with Rampage Jackson of the A-team and Jermaine Clement from Flight of the Concords. Zamolo made her debut with Make it or break it in 2009, and her cinema debut with the 2016 movie Do over.

Rebecca Zamolo is happily married to Matt Yoakum. Her husband Matt is also known as Matt Slays. They don't have any children yet. There are no rumors of her other affairs, boyfriends, or relationships.

Happy Valentine’s Day to all our adopted children A means you want a special DM valentine from me today . Can you name all the @marksingerman photos on my feed?? List them below

Rebecca Zamolo's net worth is estimated to be $3.2 million. Her multiple professions have helped her gain and maintain the net worth.