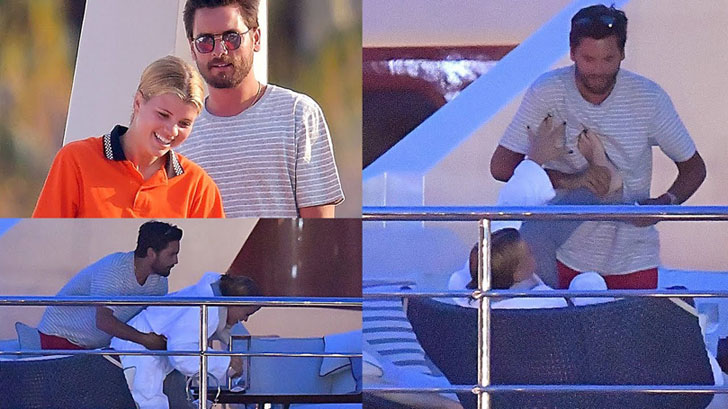 Scott Disick and Sofia Richie have taken their relationship to the next level as they announced they are in a relationship on Instagram on Saturday. Not only that, but they’ve also celebrated receiving a ‘congratulations’ cake by kissing on the lips in front of their friends.

The 34-year-old Keeping Up with the Kardashians star posted a sweet snap of himself and Richie,19; posing together in front of a blue sky keeping Disick’s face behind  Richie’s.

there so cutee i need a boyfriend asap honestly this is A GOALS AF! @sofiarichie @letthelordbewithyou

The reality star Disick and singer Lionel Richi’s youngest daughter celebrated their love with a sweet treat at a Miami restaurant where they received dinner on a plate where ‘’Congratulations Scott & Sophia’’ were written with the name (Sofia) was misspelled.

Earlier this year, Richie was rumored to be dating with the infamous party boy- father of three and ex-lover of Kourtney Kardashian, however, she shot the rumors down.

Scott and Richie have been rumored dating since they were spotted together at the Cannes Film Festival in May which they have been shutting down. Richie had been saying she and Scott are only good friends and she also posted a tweet in May saying:

Just so everyone can get their panties out of their a–es, Scott and I are just homies.

On Thursday 21 September, the alleged couple were spotted kissing in Miami- hinted the couple was more than just friends and two days later they shared a sweet Instagram snap saying they are a couple.

Richie has been sharing lots of other moments with her new boyfriend Scott on her social media, and the couple seems pretty happy with each other.