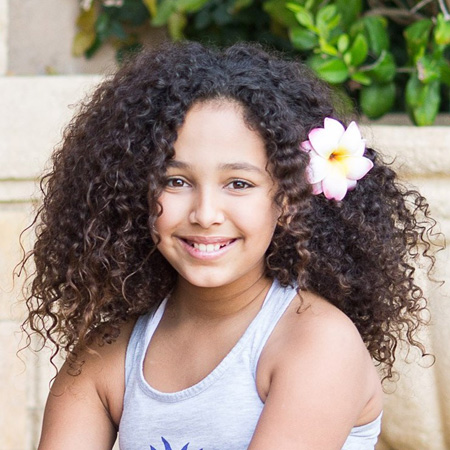 Raquel Justice was born on 16 June 2004 in San Diego, California. Raquel was born to her father David Justice, former MLB player and mother Rebecca who worked as a designer and model.

Before moving on to pursue her career, Raquel played on the stage and performed the title roles in Peter Pan and The Little Mermaid.

She is Afro-American in ethnicity and holds an American nationality.

Justice's career began in the year 2016, when she made her appearance in the ABC Family series 'Recovery Road,' as Young Maddie. She gained pretty much fame from the role.

The following year, Raquel appeared in another TV series Nicky, Ricky, Dicky & Dawn as Susan. Recently, she is a cast member on the famous Youtube channel, Kids React.

Raquel Justice is represented by elite representation from Trilogy Talent and ZURI Model and Talent, she is also a devoted student to the nationally known elite studio Gray Studios.

Raquel Justice is only thirteen years currently and she is too young for her age to get involved in love affairs and making boyfriends.

Besides that, Raquel loves dancing, her favorite kind of dance is hip hop, because she likes pop and swagger. "It really gets me pumped up, and it is such a fun dance to learn", Raquel said in an interview.

Raquel is also involved in Charity programs, as she has supported, helped all kinds of children in need. Her preferred charitable foundation is Fresh Start Surgical Gifts.

They transform the lives of differently able infants, children, and teens suffering from physical deformities caused by birth defects, abuse accidents or disease. Raquel has also helped with the Ronald McDonald House Charities by volunteering time to help needy families.

Raquel has earned quite a good amount of money from her acting career as she has made her appearance in only two television series to date.

She is just thirteen and there's a lot of time for her to earn huge amount of money, whereas her father David Justice has a total net worth of $ 40 million.