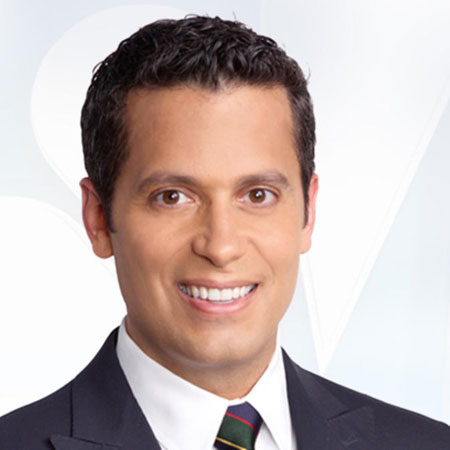 Raphael Miranda is the Two-time Emmy award-winning weekend and noon meteorologist for NBC 4 New York. He previously worked at WNBC television as a producer in New York City, New York. Miranda also featured as a meteorologist on Telemundo 47 and presented the weather forecast in Spanish.

This versatile meteorologist Raphael Miranda was born in Bedford Hills, New York, United States of America, on April 26, 1977. He was raised in Westchester County and was keenly interested in journalism since his early age.

Regarding Raphael’s ethnicity, he is a Caucasian and as far as his nationality is concerned, he is an American.

Besides, Raphael Miranda is also a well-educated person, who has three honor degrees. He received a Bachelor of Arts degree in Spanish from New York University. Moreover, he earned a Bachelor of Science degree in broadcast journalism from Brooklyn College before receiving a meteorology degree from Mississippi State University.

Raphael Miranda began his journalism career as a weather intern along with Chris Camino and Lauren Scale at WNBC in the year 2007. After that, he appeared on a number of national and local networks including MSBNC, CNBC World, and News 12 Westchester.

Raphael served for Weekend Today as a weatherman and from 2014 he began hosting the MegaPhone Interactive Trivia.

Raphael Miranda is two times Emmy winner and won his first ‘Emmy Award for Weather’ for coverage of Hurricane Irene in 2011.

Along with the success in his career. The two Emmy Award winning Meteorologist Raphael Miranda is openly a gay and is married to his longtime boyfriend Doug Simpson.

The couple wedded in a private ceremony. Moreover, Raphael is also very open regarding his personal life. The weather reporter Miranda openly acknowledges ‘he is a gay’.  On November 16, 2016, it was announced on Miranda’s Twitter that they are expecting their first child with their friend Sarah, who acted as surrogated mother. They tweeted:

"Our longtime friend Sarah (and now co-parent) is pregnant with our first child!"

Later, Raphael again shared a picture showing the baby bump of Sarah on May 26, 2017. After a month the couple welcomed their child. The couple is living happily together with their child in New, Jersey.

Other than that, Miranda is fluent in Spanish, Portuguese and has a working knowledge of French. Moreover, he is an avid lover of animals, has a dog and two cats.

With a decade long career, Raphael Miranda is believed to have maintained good net worth, however, there is no any official figure mentioned. He lives a very lavish life which can be seen on his social sites. His salary is assumed to be around $400 thousand and has made the net worth of around $1 million.

Moreover, Raphael won two Emmy Award. Miranda received his first Emmy for coverage of Hurricane Irene in the year 2011. A cost of each Emmy statue is approx. $400. After receiving Emmy, journalist’s salary increase up to 300%. We can assume that Raphael’s salary also increased after winning two Emmy Awards.