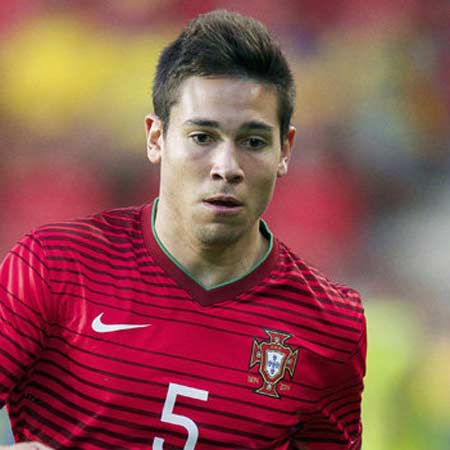 Sparkling Portuguese professional footballer, Raphael Guerreiro is currently playing as a left back and also as a left midfielder for the German club, Borussia Dortmund, and the Portuguese national team. Guerreiro started his professional career at Caen. Since the start of his career, he has appeared in 200 games scoring 19 goals whereas he has played in 21 international matches with 2 goals.

Guerreiro is a married man and has two children.

Raphael Guerreiro was born Raphael Adelino Jose Guerreiro on 22nd December 1993 in Le Blanc-Mesnil, France. His birth sign is Capricorn. He is French as per nationality and is of Caucasian ethnicity/race. He is the son of a Portuguese father and a French mother.

Raphael Guerreiro played youth football for three clubs. In 2008, at the age of 14, he signed a contract with Stade Malherbe Caen. He made his professional debut in the season 2012-13 and scored a goal. His consistent performance throughout the season earned him a spot at the Team of the Year.

Guerreiro signed a four-year contract with FC Lorient on 27th June 2013. On 10th August 2013, he made his debut for the club in 0-1 away loss against Lille OSC. He scored his first goal on 1st November 2014 in a 1-2 defeat against Paris Saint-German F.C.

On 16th June 2016, Guerreiro signed a four-year contract with Borussia Dortmund for €12 million ($14.15 million). He was coached by Thomas Tuchel to play as a midfielder for the team.

Raphael Guerreiro was called-up for the Portugal under-21 team after Rui Jorge's assistant saw him play. On 21st March 2013, Guerreiro made his debut in 0-1 home defeat against Sweden. On 7th November 2014, he was called-up for a UEFA Euro 2016 qualifier against Armenia and a friendly match with Argentina.

Later, he became one of the five Portuguese players included in the Team of the Tournament. He was then named for the main squad for the Euro 2016 campaign. He competed in a 1-1 draw match with Iceland.

His performance in the 1-0 win over France helped him to get nominated for the Young Player of the Tournament Award. He was named in Portugal’s final 23 man squad for the 2018 World Cup in Russia.

Raphael Guerreiro has an estimated net worth of $1 million, but, the amount is not public. Guerreiro earns a salary of €60k ($70743.06) playing for Borussia Dortmund. His current market value is €23.58 million ($20 million).

Raphael Guerreiro is a married man but has not revealed many details about his marriage life including the identity of his wife. The couple shares two children, a son and a daughter together. Their son Sacha was born on 3rd June 2014 whereas their daughter Ana was born on 18th August 2016.

His favorite players are Cristiano Ronaldo and Pauleta. Besides, he has tattoed the name and date of birth of his son.

Here is the video which shows Raphael Guerreiro's skill: