Corey Woods, aka Raekwon, one of the founders of the Mafioso rap genre, is an American rapper c u m singer best known for being one of the founding members of the American hip hop group Wu-Tang Clan. He is popular for his soundtrack in famous movies like The Man with the Iron Fist, Blade: Trinity, Nerve, and Ninja Assa s sin.

50 years old Raekwon was born on 12 January 1970 in Brooklyn, New York, the United States to Andrea Woods and her husband.

Regarding his educational career, he went to New Drop High School, where he met his clan member Remedy and other artists like Inspectah Deck and Method Man.

From Sha Raider To Raekwon

Many know Woods as Raekwon, but few know him from his former alias name, Sha Raider. In 1992, he joined the Wu-Tang Clan and performed in several shows with different names such as Raekwon The Chef, Shallah Raekwon, Louis Rich as well as Lex Diamonds.

With the Wu-Tang Clan, he released a number of albums, including Enter the Wu-Tang (36 Chambers), Wu-Tang Forever, The W, Iron Flag, and 8 Diagrams. 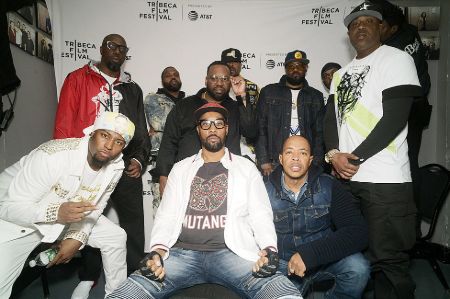 In 1994, he released his first single, Heaven & Hell from Loud Records. Eventually, he gained popularity with songs such as C.R.E.A.M, Protect Ya Neck, Da Mystery of Chessboxin', Incarcerated Scarfaces, Back in the Game, and so on.

He has been active in the music industry since 1991 and has collaborated with artists like Fat Joe, Nash, Dr. Dre, Busta Rhymes, Rick Ross, and others.

American rapper Raekwon is estimated to have a net worth of $13 million as of 2020. He gathered his net worth from his successful professional career as a rapper. His main sources of income are record sales, endorsements, and sponsorship deals.

As aforementioned, here is the list of his earnings from album sales

For his songs, he has been nominated for the 2009 Grammy Awards, 2013 Black Reel Awards, 2019 International Doc u mentary Association.

Raekwon lives low-key when it comes to his love life. 173 cm tall rapper is yet to introduce his soon to be wife.

With his estranged longtime girlfriend, he is blessed with a son, Jabairi Woods. He also a daughter named Cori Andrea Woods after his mother.