Prince George Meets the Obamas in their visit to the UK 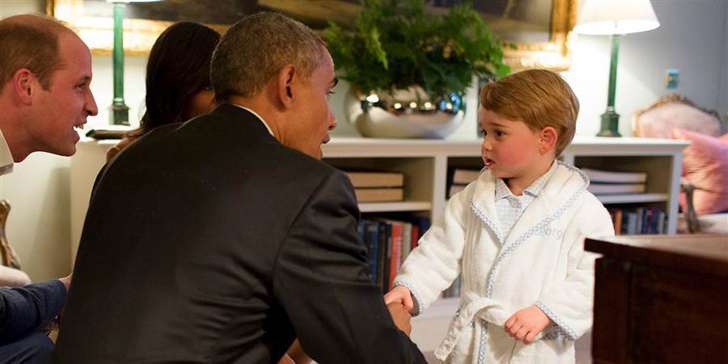 The extremely cute and the extremely famous celebrity, the 2-year-old Prince George of the UK met the Obama Family on their visit to the United Kingdom this May. The little Prince stole the highlights after the pictures of him shaking hands with the President of America were released out in the news tabloids. Prince George was dressed handsomely in monogrammed dressing gown as well as blue gingham pajamas.

The handsome Prince was also been known to have played on a rocking horse that the Obamas has gifted him. The Duke and the Duchess of Cambridge thanked the Obamas immensely for the stuffed toy and the rocking horse that was gifted to Prince George and the third in line to the throne seemed extremely happy with the entire affair and the hustle-bustle that remained in the Palace.

President Obama has revealed how charmed he became by Prince George and has named him a young royal. Pictures of the little prince rocking on the horse have also been revealed on the news tabloids and these photos seem to have stripped off all the attention of the tour of the Obama family.

Prince George is the first son of the duke and Duchess of Cambridge and is third in succession to the throne. He has brown eye color just like his mother and seems to be happy and healthy at the age of 2. Prince George surely is a good little kid who has managed to charm him President of America. The little prince has been the subject of paparazzi attention and has become a celebrated personality in the world ever since his birth and the pictures of his first day of school on January this year too were released on the news tabloids lately. He will surely grow up to be the perfect King when he grows older.