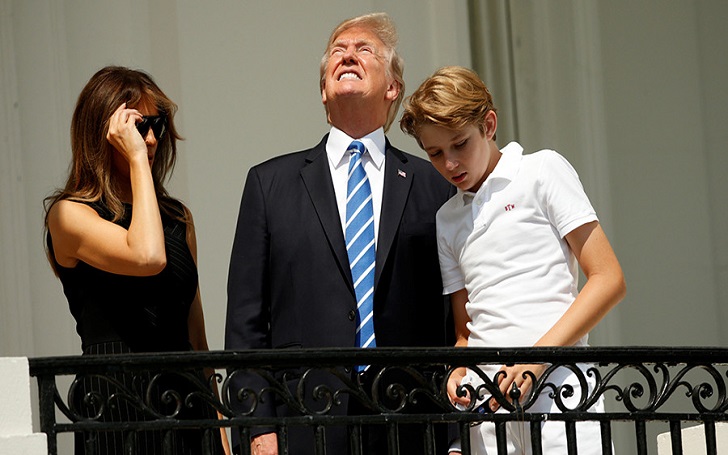 All of us got to see the great solar eclipse but on the same day, we also saw something that’s once-in-a-century event.

And that’s President Donald Trump staring at the Solar Eclipse without the protective glasses.

First lady Melania Trump and President Trump looked Monday’s once-in-a-generation solar eclipse from the White House. The couple stood on the Blue Room Balcony with their son Barron to take in the eclipse as it made its way through the Washington area.

Even though all the Americans were warned by NASA experts and astronomers not to look directly at the eclipse without specially-made glasses that were being sold everywhere, President Trump didn’t seem to be a fan of society’s so-called rules.

While the people present there repeatedly screamed at him saying, “don’t look,” the president squinted his eyes and peered up at the sky from the White House’s Truman balcony in Washington, D.C., at 2:39 and 2:43 p.m.—or right around peak viewing for the area, which saw the moon cover 81 percent of the sun.

A moment later, Trump, with his glasses back on, turned his head upward and looked the eclipse for around a minute and a half as the eclipse reached its apex. When some reporter asked him, “how’s the view?” he answered him giving a thumbs up.

#Trump doesn’t need protective eye wear! “I have the greatest corneas of all time, really. The best.” #Eclipse pic.twitter.com/uXdsQGsz9j

Trump will stare directly into the eclipse because everyone told him not to.