Born on February 29, 1980, Peter Scanavino is 42 years old. He is a native of Denver, Colorado, United States. The actor holds an American nationality and stands at the height of 6 feet (1.83 m). He also has a brother named David.

Moreover, Scanavino is of Italian descent as his grandfather was from Turin. The pa s sionate actor briefly pursued the culinary arts at The French Culinary Institute in New York before returning to acting.

Scanavino came into the showbiz industry in 2005 by appearing in Jonny Zero as Travis. In the same year, he got wide recognition after appearing in hit series like Third Watch, Law & Order: Trial by Jury, and Law & Order: Criminal Intent. From 2006 to 2010, he starred in The Bedford Diaries, Under Surveillance, On the Shoulder, Deception, The Informers, Royal Pains, Law & Order, Happythankyoumoreplease, Zenith, and Old Friends. Similarly, he has worked in the television series, A Gifted Man, which also stars Patrick Wilson, Jennifer Ehle, and Pablo Schreiber.

After he got a good response from people, Scanavino got more active in the acting field and has worked in other projects such as The Good Wife, Frances Ha, Do No Harm, The Cold Lands, Golden Boy, Mutual Friends, Unforgettable, Banshee, The Blacklist, Person of Interest, and The Leftovers. His latest roles can be seen in Chicago P.D, Social Distance, Law & Order: Organized Crime, and Law & Order: Special Victims Unit.

How Much Is Scanavino Net Worth In 2022?

Throughout his career, the Law & Order cast has worked in more than thirty films and television series that must have paid him well. According to Idol Net Worth, Peter Scanavino's net worth is around $9 million. The majority of the actor's income comes from his profession as an actor. In addition, an actor in the United States of America has a salary range from $48,401 to $71,712, with an average base salary of $58,734.

So, Scanavino might earn in the same range from his acting profession. He has worked in various big-budget movies, including Frances Ha, which had a budget of $3 million and it grossed $11.3 million. Some other projects are:-

Besides earning from acting, Scanavino might earn from endorsement deals. As per the Influencer Marketing Hub, he earns $654.75 - $1,091.25.

Married To His Wife Lisha Bai

The 42 years old actor is happily married to his wife, Lisha Bai. They have been with each other since July 2, 2011, and have already started their own family. According to the Wikipedia page of Scanavino, he and his wife have three children. 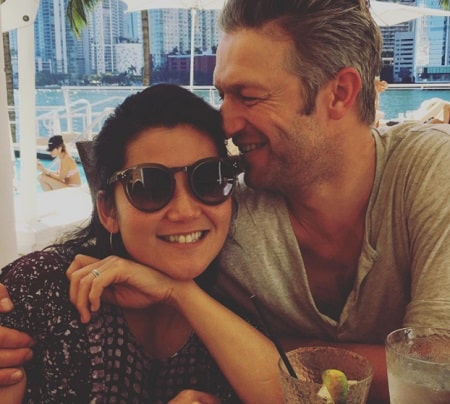 Furthermore, the famous actor posts picture with his wife on his Instagram account. Apart from that, Bai is a painter and a post-war artist. The graduate of Washington University attended earned an MFA in Painting/Printmaking at Yale University.