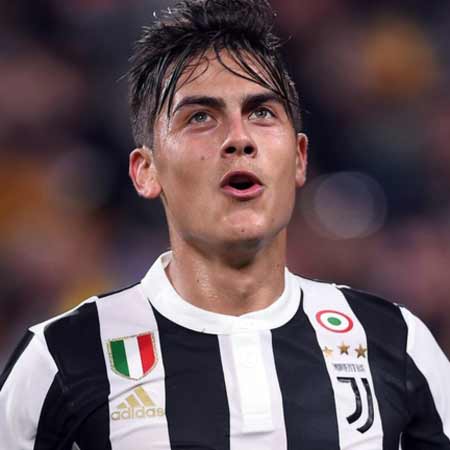 Paulo Dybala is often hyped as the future of Argentine football and next-generation superstar.  Only 24 years of age, Paulo Dybala has already scored 100 goals for Italian giants Juventus and has won Serie A twice in his two years at the club.  Dybala has impressive technique, vision, natural goal-scoring ability and can play in any position of front three. He is not only goal poacher but also a flamboyant striker who can provide a s sists to his team and can improve the overall gameplay of the team.  Already tipped as next Messi or Aguero,  Dybala does not have so many caps for his national team and was also not included in Copa America Centenario squad, but it may change soon with the coming FIFA World Cup 2018 Russia.

Paul Dybala born Paulo Bruno Exequeil Dybala on November 15, 1993, in Laguna Larga, Cordoba to father Adolfo Dybala and mother Alicia de Dybala is an Argentine soccer player. His lineage extends to Italy as his grandmother Da Messa was from Naples, Italy. Born and raised in middle-cla s s family Dybala's father famously predicted one of his sons would be footballer even before he was born.  He is grateful to his father for believing in him and supporting him from his early young age to play football. Unfortunately, his father died in 2008 and could not see his amazing achievements as a professional player.

Dybala joined his hometown club at the age of 17 in 2011 named Instituto Athletico Central Cordoba and made his professional debut in division 2 of Argentine league. He played 40 matches with the club scoring  17 goals. In his time at Athletico Cordoba, he was the first player to score two hat tricks in the season and became the first player in the league to score in six consecutive games. On July 20, 2012, he was signed by Italian Football club Palermo. His strike partnership with fellow footballer Franco Vazquez earned him a lot of praise in Palermo and many of the pundits quoted him as next Lionel Messi. He scored his first goal for Palermo against Sampdoria in 2-0 win on November 11, 2012.  During three seasons with Palermo, he made 89 appearances for the club and scored 21 goals.

Rumors spread of Dybala going to Premier League clubs but instead, he chose to stay in Italy and join Juventus instead for $56million for a  five-year contract in June 2015 and wore no. 21 shirt previously worn by Italian legend Andrea Pirlo. He made his debut against Lazio in Italian Super Cup and scored as well as provided a s sist in 2-0 win.  On 30th August 2015, he scored his first league goal of the season against Roma in a 2-1 defeat. His first Champions League goal and also important one came against Bayern Munich in a 2-2 home draw in Round of 16.  In his first season at Juventus, he scored 19 goals leading them to yet another Serie A title and became top scorer of the club scoring 23 in all competitions.

Following the start of 2016/017 season, Paul Pogba departed to Manchester United leaving his no.10 shirt behind which was offered to Dybala but he refused. He scored his first goal against Dinamo Zagreb in Champions League group stage in a 4-0 win. His first goal in the league came against 3-0 win over Empoli. In Champions League quarterfinal against Barcelona, he scored in a 3-0 win.  That season Juventus again won the Serie A title and had great Champions League run reaching to the finals but eventually lost to Real Madrid.  Dybala was named as one of the three finalists for the forward of the 2016-17 season of Champions League. On September 2017, he made 100th appearance for the Juventus and also scored his second hattrick.

Dybala made his first senior appearance for Argentina under Gerard Martino replacing  Carlos Tevez in the 75th minute against Paraguay in World Qualifying Match. Previously under youth ranks, he was invited to participate in XVI Pan American Games but he refused. He was also not included in Argentina's 23 man squad for Copa America Centenario.

From a young age, Dybala was destined to be great showing amazing skills on the pitch. The real limelight came in his career when he switched to Juventus for a fee of $56million.  According to various sources, Dybala's annual salary is $7million and his estimated net worth is believed to be $25million. Paulo Dybala also has a collection of cars including Range Rover, Mercedes, and Audi.  Dybala has over 15 million followers on his Instagram.

Dybala is not married yet but he has a girlfriend named Antonella Cavalieri.  They were in a relationship for past few years after which the couple walked their separate ways.

After the breakup, Dybala was linked to Ginevra Sozzi. They first encountered each other on the Spanish island of Formentera. At the time Dybala was in a relationship with Cavalieri. Sozzi is a model and she said that while they met she did not know that he was a famous player.

A video of Dybala's skill.